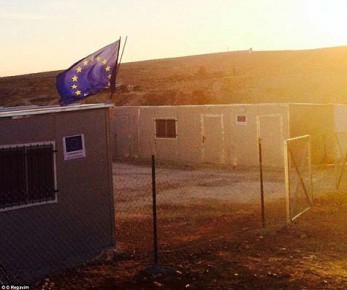 The EU delegation to Israel is claiming diplomatic immunity regarding an attempt of the Israeli NGO Regavim to sue them in Israeli court for funding rampant illegal construction in Area C, the portion of the land under Israeli jurisdiction according to the Oslo accords, the Daily Mail reported Tuesday.

Regavimg launched legal action after using a drone to collect photographs showing EU flags flying above buildings on Area C land. Since the EU is a signatory to the Oslo Accords, this constitutes a flagrant violation of the contract.

But the EU bureaucrats claim diplomatic immunity, meaning they can do whatever they want on Israeli land, with impunity.

The 1,000 or so documented buildings are awarded to Arabs, as a means of shaving off Israeli owned territory and adding more land to the Arab areas. When Israeli courts issue orders to raze these illegal structures, the EU delegation returns the next day to rebuild them, at European taxpayers’ expense.

Conservative MP Jacob Rees-Mogg told the Mail: “It is deeply concerning that the EU falls back on diplomatic immunity after breaking planning regulations. The UK Government would take a very dim view of a friendly state doing that to us. Diplomatic immunity is there to protect envoys from unjust treatment, not to protect the high-handed behaviour of arrogant bureaucracies.”

The MP added: “The EU maintains that it is based on fundamental principles of rule of law and support for democracy. But when this clashes with its bureaucratic bungling, neither rule of law nor democracy seem important.”

An EU spokeswoman told the Mail that international humanitarian legislation (she didn’t specify), together with her belief that Area C will eventually end up in Arab hands, allows the EU to proceed with the illegal construction. But when she was asked whether said construction was consistent with the Oslo agreement she would not say.

Regavim argues that the EU is not entitled to diplomatic immunity in this case, citing Article 41 of the Vienna Convention which states that immunity for diplomats is conditioned on their not interfering in the internal affairs of their host State.