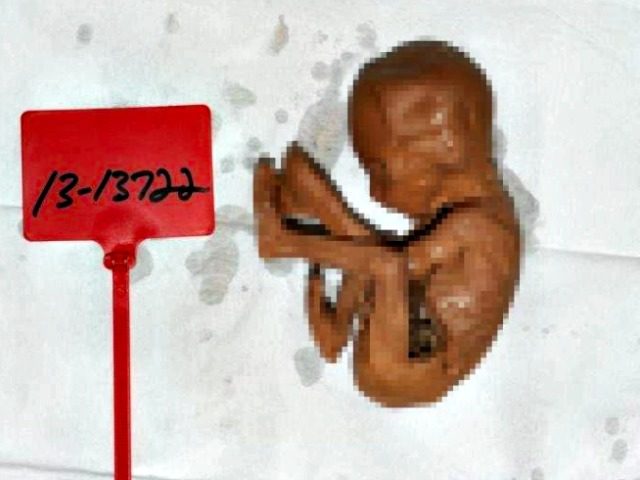 According to the report, federal agents found the four whole human fetuses in December 2013 during a raid of a warehouse owned by Arthur Rathburn, a former body broker who has been accused of defrauding purchasers by sending them diseased body parts.

Rathburn has reportedly pleaded not guilty to the charge and faces a trial in January.

The fetuses appeared to have been in the second trimester of their mothers’ pregnancies and were reportedly submerged in a fluid that included human brain tissue.

How Rathburn acquired the fetuses and what he intended to do with them is unclear. Rathburn’s lawyers did not respond to requests for comment, and neither the indictment nor other documents made public in his case mention the fetuses.

In its caption of the photos of the fetuses, Reuters’ editors note the wire service “has pixelated this image; editors judged the original image to be disturbingly graphic.”

Rep. Marsha Blackburn (R-TN) – chairman of the House Select Investigative Panel on Infant Lives – was shown the photographs of the fetuses and reportedly “recoiled” when a Reuters reporter revealed them.

“This needs to be reviewed,” she said, adding that the discoveries draw further attention to the practices of those procuring human body parts.

Blackburn’s special House panel investigated the procurement of body parts of babies aborted in Planned Parenthood and other clinics throughout the country.

The U.S. Department of Justice has launched a formal investigation into Planned Parenthood over its alleged sale of the body parts of babies aborted in its clinics for a profit.

“The buying and selling of cadavers and other body parts — with the exception of organs used in transplants — is legal and virtually unregulated in America,” Reuters notes, adding:

But trading in fetal tissue violates U.S. law. In most states, including Michigan, public health authorities are not required to regularly inspect body broker facilities. As a result, it’s impossible to know whether body brokers who deal in adult donors are acquiring and profiting from fetuses.

“The actions depicted in these photos are an insult to human dignity,” said Rep. Bob Goodlatte (R-VA), who chairs the House Judiciary Committee.

Goodlatte told Reuters if individuals “violate federal laws and traffic in body parts of unborn children for monetary gain,” they should be “held accountable.”

Reuters reports it conducted its investigation, in part, by having a reporter attempt to purchase two human heads and a cervical spine from Restore Life USA, a body brokerage in Blackburn’s home state of Tennessee.

“The deals were struck after just a few emails, at a cost of $900 plus shipping,” Reuters reports.

“It is sickening” how easily Restore Life sold the parts to Reuters, Blackburn said.