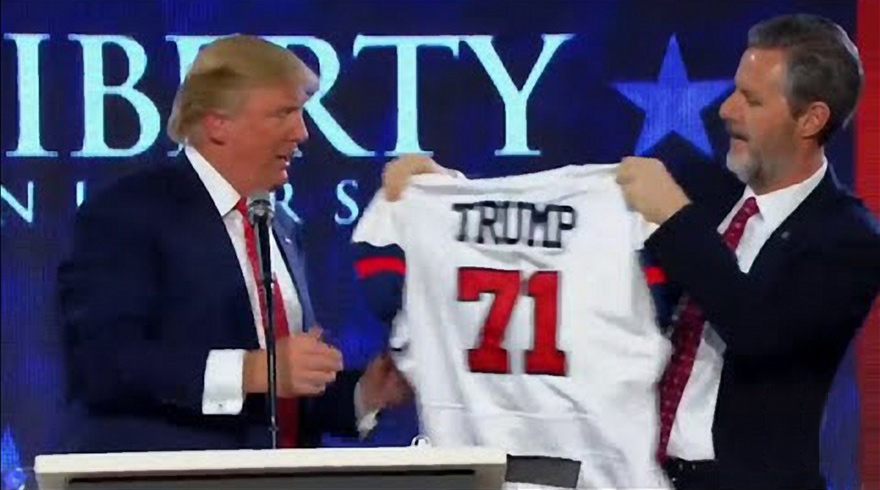 This presidential election cycle as a whole has been one disgusting display after another. Neither candidate should be awarded with the presidency. Neither one possesses strong moral fiber. Both Hillary Clinton and Donald Trump have things in their past and present which are highly questionable or downright insidious. Yet both of them have cheerleaders willing to prop up and protect them at any cost.

One of the most disappointing aspects of the last few months has been the ease at which Evangelical leaders rally around their “chosen one”, Donald Trump. He lacks basic moral decency, but never mind that. People like Ralph Reed of the Faith & Freedom Coalition, Jerry Falwell, Jr., president of Liberty University, and Dr. James Dobson of Focus on the Family all support Donald Trump.

It’s clear that many prominent men in the Evangelical movement are awestruck by celebrity and unwilling to show actual leadership, something they just love to be known for. This is a slap in the face to women as a whole but especially to the sisters of faith who serve beside them. Trump not only views women as objects, but has forced himself upon them simply because he can. Those like Reed, Falwell, and Dobson lack backbones, so the women will take the lead instead.

Popular author and speaker Beth Moore is fed up, as The Daily Beast reports:

“I’m one among many women sexually abused, misused, stared down, heckled, talked naughty to. Like we liked it. We didn’t. We’re tired of it,” Moore said. She also had a word about evangelical leaders still supporting Trump: “Try to absorb how acceptable the disesteem and objectifying of women has been when some Christian leaders don’t think it’s that big a deal.”

Increasingly, moderate and conservative Christian women are speaking out about Trump’s brand of misogyny and divisiveness, and condemning support for the nominee or silence about him from male evangelicals.

…women see Trump’s comments not just as a gender issue but also a theological one; as Rev. Lisa Sharon Harper, Chief Church Engagement Officer for Sojourners, shared with me, “Trump’s offense is not only against a gender. His assaults on women are direct assaults against the image of God on earth.”

Churches across America have very different views on the role of females in communities of faith. Regardless of individual preference, as inspired by Biblical prompts or not, it is inexcusable to demean women in whatever fashion. Sadly, it seems like some male Evangelical leaders are more than willing to sweep misogyny under the rug and excuse it away because “we have to beat Hillary Clinton”.

The pro-life issue is a main reason why these men and others support Donald Trump. (This is laughable to begin with considering Trump’s own very shaky stance on abortion and his praising on Planned Parenthood.) If these men are so concerned with protecting the inherent worth of each individual, shouldn’t that extend to protecting the femininity of women, whether they’re a part of the church in America or not? Support for Trump is a stamp of approval on behavior which views women as nothing more than objects to grope, rub up against, or to have sex with and then discard.

Excuse me, but we won’t be treated like that.

I don’t believe that I, as an American woman, am oppressed. However, it is beyond disappointing that men who not only claim faith, but are in leadership roles, are so willing to dismiss a predator among them. Maybe Trump has promised them some future role? I don’t know. Regardless, they are lured away from doing their duty and instead join in with someone whose hobby is casting females aside.

I’m disgusted by Trump and his male cheerleaders. You should be, too. Thankfully, women like Beth Moore and Rev. Lisa Sharon Harper won’t stay quiet on the sidelines as some Evangelical men have always wished they would.