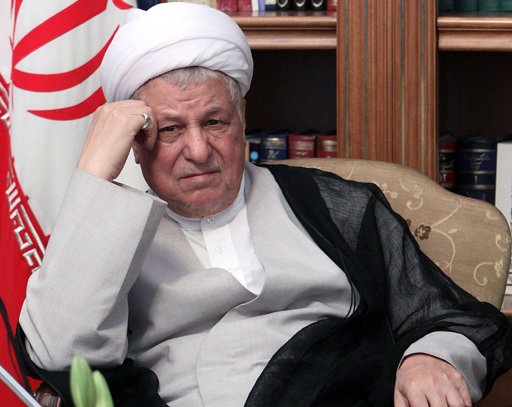 A former Iranian president admitted this week that the country’s nuclear program was started with the intent of building a nuclear weapon.

The comments by Akbar Hashemi Rafsanjani to the state-run IRNA news agency would appear to mark the first time a top Iranian official — current or former — has said the country sought a nuclear weapon, in contravention of repeated assurances by the regime that its enrichment program is and always has been peaceful.

Rafsanjani said the program was begun while the country was at war with Iraq in the 1980s with the express consent and participation of Ayatollah Ali Khamenei.

The comments by Rafsanjani, which do not appear on IRNA’s english website, were first reported on by the National Council of Resistance of Iran, a dissident group of Iranian exiles.

“Our basic doctrine was peaceful usage of the nuclear technology although we never abandoned the idea that if one day we are threatened and it is imperative, we would have the capability for going the other path [to nuclear weapon] as well,” Rafsanjani said, according to the NCRI translation.

According to the NCRI, Rafsanjani’s comments are tantamount to admitting that the country is still pursuing a nuclear weapon, though that assertion was not borne out by the group’s translation of the interview.

“The statement by Rafsanjani is an unequivocal testimony to the fact that the Iranian regime, from the onset until present, and under direct supervision of Khamenei and Rafsanjani, has been in search of the nuclear weapon and has never abandoned it,” NCRI said in a statement

Here are excerpts from the NCR-Iran article:

Ali Akbar Hashemi Rafsanjani, former Iranian regime President and present head of regime’s State Exigency Council that has been regime’s No. 2 man from the outset made unprecedented concessions in an interview that the regime was looking to acquire nuclear bomb when it initiated its nuclear program and has never abandoned the idea.

According to this interview published by regime’s official news agency IRNA on 26 October 2015, Rafsanjani in the capacity of speaker of parliament or President and Khamenei as President or Supreme Leader of this regime have been personally following up the project to acquire the nuclear bomb. Moreover, Rafsanjani has acknowledged that from the onset there has been a comprehensive clandestine nuclear plan, including construction of secret sites, enrichment of uranium, manufacture of centrifuge parts, laser technology, and the heavy water reactor.

In this interview Rafsanjani says: “At the time that we started, we were at war and we were looking to have this capability [the nuclear bomb] for the day that our enemy would want to resort to the nuclear bomb.” He audaciously continues, “Our basic doctrine was peaceful usage of the nuclear technology although we never abandoned the idea that if one day we are threatened and it is imperative, we would have the capability for going the other path [to nuclear weapon] as well”.

Rafsanjani acknowledges in this interview that both he and Khamenei wanted to meet Abdul Qadeer Khan. He noted: “There were some talks with the Pakistanis. There was a nuclear scientist called Abdul Qadeer Khan in Pakistan… In a trip to Pakistan, I asked to see him. They did not show him to me… I had gone to Pakistan twice. In any case, I did not see him. Ayatollah Khamenei did not see him either. However, during the war, we were both pursuing to begin the work. It seemed that Mr. Abdul Qadeer Khan himself believed that the Islamic World should have the nuclear bomb. He believed in this and it was he who built Pakistan’s nuclear bomb although it took time to build the bomb. In any case, they agreed to help us a bit.”

Rafsanjani’s interview clearly indicates that from the onset the regime was after deceiving the International Atomic Energy Agency. “We had no problem with the IAEA in the nuclear activities because we were an IAEA member. They would come and sometimes point to some problems and Mr. Amrollahi and his friends would respond to them. During the early work, the agency never disturbed us although it didn’t help us either,” he says. “After my tenure as President, the West suddenly realized that we have made advances in different sections.”

The NCR-Iran article also notes that Rafsanjani didn’t say a word about the supposed fatwa issued by Iran’s Supreme Leader Khamanei against nuclear weapons – because he was directly involved in the nuclear weapons project, and tried to meet with Pakistan’s Abdul Qadeer Khan, the father of the Islamic bomb!

Details about previous nuclear activities are one of the demands that the US has caved on, even though it is critical information for the IAEA to know where to look for evidence of a nuclear weapon program today.