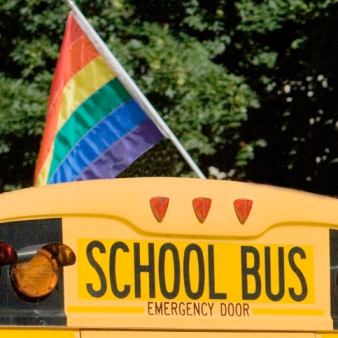 A public high school in San Francisco has introduced a “gay” history that may become a model for schools nationwide, if homosexual-rights groups have their way.

“LGBT Studies” at the Ruth Asawa School of the Arts in San Francisco is regarded as a valid preparatory class that can be used to fill the requirements for attending California’s public university system.

The creator of the course says it will cover “terminology,” the history of various LGBT leaders, portrayals of LGBT people and “transgender issues.”

The class may be just the beginning.

The Human Rights Campaign, an influential homosexual-rights group, is using its “Welcoming Schools project” to provide “resources” to schools around the country on how to handle issues surrounding homosexuality. The website even provides lesson plans “aligned with Common Core standards.”

Charles Girard, the Welcoming Schools coordinator, instructed teachers on how to “make a classroom gender-inclusive” in a recent blog post that included tips for avoiding “using gender to divide and address students.”

Paul Kengor, a historian, professor and the author of “Takedown: From Communists to Progressives, How the Left Has Sabotaged Family and Marriage,” says the high school class is “no surprise whatsoever.”

“This kind of thing has been happening at the university level for two decades now. On today’s campus, these programs are commonplace and nary raise an eyebrow among students whose sex-saturated culture is leading them to think that one in two or three of their classmates is gay. At our horrendous universities, the gay lifestyle is not merely a subject but a full-blown major – a formal program of study. It is also, for some students, a way of life. And any millennial educated in modern classrooms will tell you that a prime breeding ground for same-sex marriage has been the university.

“So, it was only a matter of time before this cultural insanity trickled to our public schools, especially given the U.S. Supreme Court redefining marriage and imposing it upon all 50 states as a literal constitutional ‘right.’ Our schools will be teaching kids that same-sex marriage is not only a legitimate form of ‘marriage’ but is a literal constitutional right in America. For this, we can thank Anthony Kennedy and the Supreme Court’s four liberals.”

Kengor observed such classes create a mistaken impression about the prevalence of non-traditional sexuality.

A recent research paper by the National Health Interview Survey found less than 3 percent of participants labeled themselves as gay, lesbian or bisexual. Nonetheless, a 2015 Gallup poll showed Americans wildly overestimate the share of the LGBT population, mistakenly believing it is as high as 23 percent.

However, more than 30 percent of students at Ruth Asawa School reportedly identify as LGBT or “questioning.” A recent YouGov poll in the United Kingdom found almost half of young adults report feelings of same-sex attraction.

Michael Brown, the author of several books on homosexuality and Christianity, including the upcoming “Outlasting the Gay Revolution,” suggests such figures reflect a concerted effort at cultural indoctrination.

“Tolerance and acceptance of homosexuality are no longer enough,” said Brown. “In fact, those attitudes are now deemed ‘homophobic.’ Instead, homosexuality must be celebrated, beginning in our children’s schools. And so, it’s no surprise that in the last decade, bills have been passed in California calling for the removal of anything that could be considered offensive to LGBT students or parents (such as terms like husband, wife, dad or mom) as well as for the mandatory celebration of LGBT history in all schools, K-12, with no option for parents to opt out their children from such classes or for teachers to opt out from participation.”

Citing the polling data from Britain, Brown concludes: “This does not signal some sudden, evolutionary change in the human race; instead, it reflects the flood of gay activist propaganda influencing these impressionable kids, creating all kinds of uncertainty during their formative years. This is yet another reason why gay activism must be resisted.”

“They are aimed at totally restructuring the values and beliefs of the American people. And as we can see from studies out of Britain, the scheming has been very effective. This sick manipulation of young people is the product of a century worth of research into psychology and behaviorism, so the manipulators are becoming very advanced in the techniques they deploy against the minds and even the souls of children. For the sake of the future, taxpayers, teachers and parents must put their foot down and demand an end to these grotesque abuses and crimes against innocent children.”

Newman suggests “gay history” is simply more of the same and is “hardly a surprise.”

“In fact, it will fit right in with the other propaganda and indoctrination being force-fed to captive students in government schools all across America,” Newman told WND.

“It is also another sign of how far the government education system has strayed from what most parents imagine should be happening at school – the teaching of reading, writing, arithmetic, logic, real history, real science and so on. Rather, this course goes well with the death education, the pornographic sex education, the values clarification and the social engineering that is so severely damaging America’s youth and ultimately, its future. When the federal government’s own data reveal that half of Americans can barely read, leave it to self-styled educators to come up with something as ridiculous as a homosexual-history propaganda class. Parents should not allow their children to be subjected to this kind of outrage, and taxpayers should not be forced to pay for it.”