MSNBC went on to admit that there is no such thing as a “Palestine”.

MSNBC has apologized for airing a deeply “confused” and “absurd” graphic last week claiming to show how much land Israel has taken from [so-called] “Palestine”.

“Last Thursday, in an attempt to talk about the context for the current turmoil in the Middle East, we showed a series of maps of the changing geography in that region,” said MSNBC’s Kate Snow Monday afternoon.

“We realized after we went off the air the maps were not factually accurate and we regret using them,” she added. “Clearly, that set of maps was wrong.” 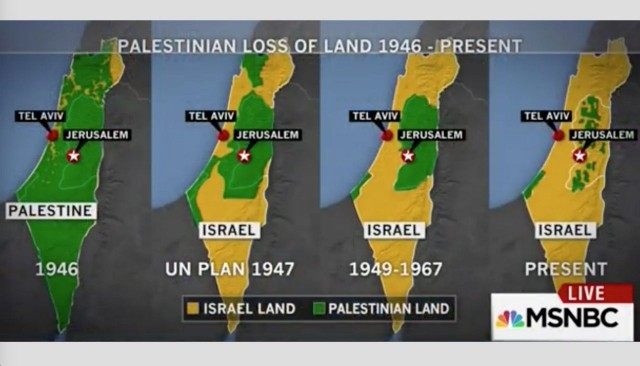 “First of all, I wish I’d said it right away when I saw them. The bottom line is that the first map showed the area as if it was a Palestinian state,” he said. “It looked as if it was all full of Arabs. And then the succeeding maps then showed fewer and fewer, less and less land all the time.”

Fletcher has covered unrest in the Middle East for nearly 40 years.

“The bottom line is it was completely wrong. There was no Palestinian — there was no state called “Palestine,” he continued. “In 1946, it was a British mandate land.”

“Al Aqsa Mosque is ours. They [Jews] have no right to defile it with their filthy feet,” Palestinian President Mahmoud Abbas said in response to reports that Israelis have been planning to approach the Temple Mount. “We bless every drop of blood spilled for Jerusalem, which is clean and pure blood, blood spilled for Allah.”

A Gaza Imam also reportedly said in an address earlier this month, “Brothers, this is why we recall today what Allah did to the Jews.”

“Today, we realize why the Jews build walls. They do not do this to stop missiles but to prevent the slitting of their throats,” he said, adding later as he allegedly brandished a knife, “My brother in the West Bank: Stab!”

The now-debunked maps aired by MSNBC appear to have been inspired by a similar graphic that “only confuses and distorts the issue, and seems clearly designed for propaganda purposes,” according to the Economist.

The idea that Jews in 1947 and 1948 seized land from Palestinian owners “is absurd,” the group reported.

“What happened was that a piece of empty desert which had been under the control of the British Mandate (who got it after the Ottoman Empire fell apart) was awarded to the Jewish state,” the Economist said.