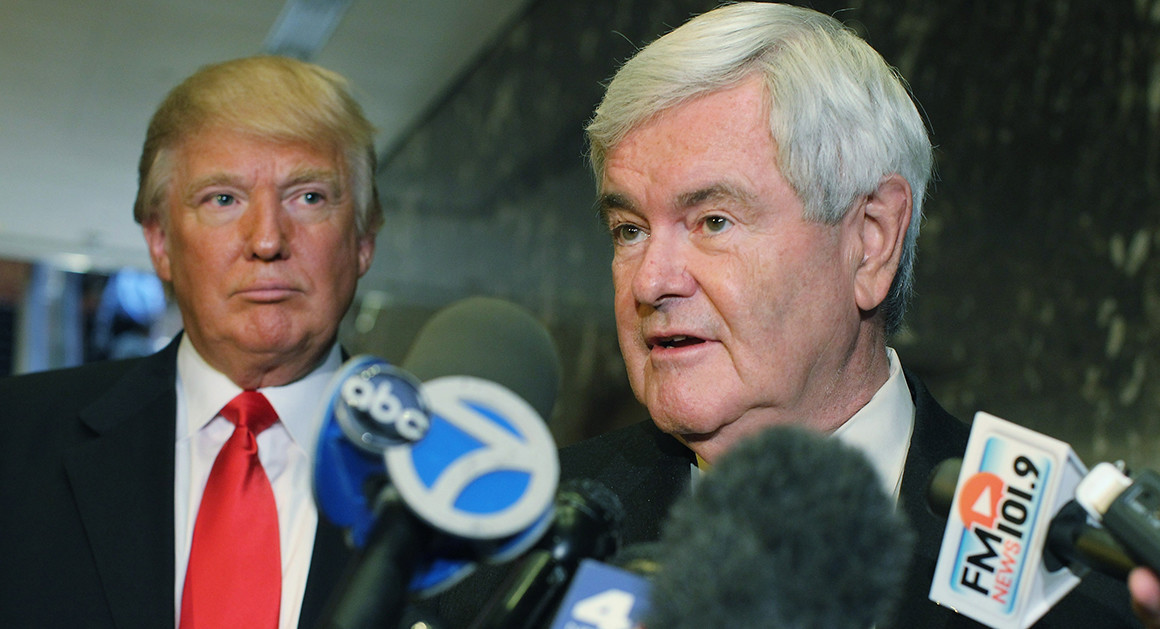 Just like we warned, Trump’s going all in for globalists and establishment.

President-elect Donald Trump’s phrase “drain the swamp” was “cute,” but he is now heading in a different direction and might be leaving behind that campaign promise, former House Speaker Newt Gingrich said Wednesday morning.

“I’m told he now just disclaims that,” Gingrich, who remains a close adviser of Trump’s, told NPR’s Rachel Martin on the “Morning Edition.” “He now says it was cute, but he doesn’t want to use it anymore . . . he’s in a different role now.”

Gingrich said he himself has a sense of humor, and likes the “alligator and swamp language” and he had written “what I thought was a very cute tweet about ‘the alligators are complaining.'”

Gingrich said he has noticed, on a couple of fronts, Trump is leaving behind some of the more incendiary language he had used in his campaign speeches, including catch phrases such “lock her up” that caught on with the audiences at his rallies who cheered when Trump spoke of Democratic nominee Hillary Clinton.

“Maybe he feels that as president, as the next president of the United States, that he should be marginally more dignified than talking about alligators in swamps,” said Gingrich, who believes, though, the talk of swamps “vividly illustrates the problem, because all the people in this city who are the alligators are going to hate the swamp being drained. And there’s going to be constant fighting over it.”

Trump himself has acknowledged his supporters have become calmer after he was elected,The Hill reported.

“‘You people were vicious, violent, screaming, ‘Where’s the wall? We want the wall!’ Screaming, ‘Prison! Prison! Lock her up!’ I mean you are going crazy. I mean, you were nasty and mean and vicious and you wanted to win, right?” Trump said during one of his “thank you” rallies in Florida last Saturday. “But now, you’re mellow, and you’re cool, and you’re not nearly as vicious or violent, right? Because we won, right?”

Gingrich also addressed Trump’s business holdings during the NPR program, saying he should deal with how to handle matters before he takes office, but said it would be “an absurdity” for the billionaire to create a blind trust.

A panel of respected experts with “total access” to Trump’s business holdings should monitor his holdings, and tell the president how to stay within bounds.

Trump is facing a “real test,” said Gingrich, because he was elected by people who think Washington has too much power.

“If Trump remains honest and seems like a person who’s authentic, he’s going to go a long way,” Gingrich said. “If under the pressure of the city, he starts dissembling and saying things that aren’t true, he’ll decay much as Obama did.”

Gingrich later in the morning discussed Trump’s election victory, after the president-elect opened the day with several tweets about his electoral college victory.

“This is the football season,” Gingrich said. “A team can have more yards and lose the game. What matters is how many points you put on the board . . . he got killed in California because we didn’t campaign there.

Gingrich also discussed an interview President Barack Obama gave this week to NPR, in which he advised not issuing as many executive orders.

“You’re watching is a man who realizes all of the sudden that like 90 percent of his legacy is going to disappear because he didn’t do the hard work of passing legislation,” Gingrich said of Obama. “He didn’t reach out to work with the other side, which by the way is also a warning to Trump. Trump needs a bipartisan Trump majority that actually passes legislation in the House and Senate.”

But lawmakers will likely split into three groups, said the former House speaker.

“You’re going to have the hard left, the Elizabeth Warrens, people who are crazy and out of touch with the world,” Gingrich said. “They’re not going to support anybody. They’re going to be hostile and bitter and nasty.”

Then there will be a partisan group, with people like Sen. Bill Schumer and Rep. Nancy Pelosi, who will be tough minded but still make deals, and there will also be Democrats who won’t want to fight every point over the next four to eight years.