We warned against the lunacy of giving Hamas and Fatah terrorists concrete and supplies to supposedly “rebuild Gaza”. 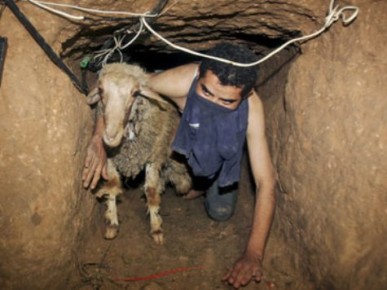 I found this disturbing picture of one of the smaller terror tunnels. What exactly is going on here?

Four months after the end of Operation Protective Edge, Hamas is back on track creating terror. As it commemorates 27 years since its inception, Hamas has begun to reconstruct the destroyed underground tunnels in Gaza and
rebuild their weapons arsenal:

Rocket Testing and Tunnel Reconstruction December 19, a rocket was fired from the Gaza Strip at southern Israel, the third projectile launched at Israel since the IDF’s most recent operation. In response, the Israeli Air Force hit a Hamas terror site in southern Gaza.

During Operation Protective Edge, the IDF took action in Gaza to stop incessant rocket attacks from Gaza – like the one that took place last week – and stop the threat posed by underground terror tunnels. As a part of the battles that took place across Gaza, civilian structures were targeted because they were used by the terrorists to attack IDF troops.

In order to aid in the reconstruction of the coastal enclave, the IDF began to facilitate the transport of construction materials into the Gaza Strip in mid-October. Only two months later, reports indicate that Hamas has resumed investment in its terror infrastructure. Israeli media report that Hamas has started to take advantage of the import of iron and other “dual-use” materials to rebuild its rocket and missile arsenal, as well as its terror tunnel system.

As a part of Operation Protective Edge, 32 Hamas terror tunnels were discovered and destroyed by the IDF. According to Palestinian sources published in the Israeli media, the Sunni terrorist organization has diverted some of these materials imported from Israel – along with other black market materials – to rehabilitate the destroyed terror tunnels.

Furthermore, Hamas recently launched a series of rocket and missile tests and has reportedly begun manufacturing new rockets. The rocket fired at Israel on Friday hit an open area in the Eshkol Regional Council, which suffered the loss of civilian life during Operation Protective Edge.