High School Teacher to Classroom: “To be white is to be racist, period” 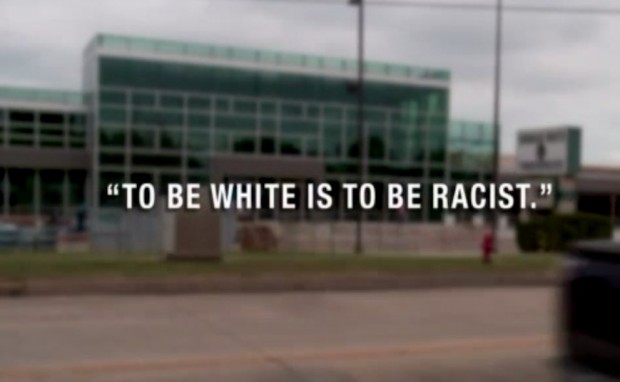 An Oklahoma high school student became disturbed at what she was seeing and hearing during a recent class, so she pulled out her cellphone and started recording.

The teacher of the elective philosophy class at Norman North High School was heard on the recording saying “to be white is to be racist, period.”

“Am I racist?” the teacher was also heard asking the class. “And, I say ‘Yeah.’ I don’t want to be. It’s not like I choose to be racist, but do I do things because of the way I was raised?”

The student who made the recording spoke to KFOR-TV; her face was obscured and her voice was altered to protect her identity. “Half of my family is Hispanic,” she told the station, “so I just felt like, you know, him calling me racist just because I’m white … I mean, where’s your proof in that?”

She added: “I felt like he was encouraging people to kind of pick on people for being white.”

Her cellphone also caught a video being shown to students depicting an actor brushing white-out across countries on a globe and then writing a new name over the white space.

“So he was basically comparing what he’d done to the globe to what we did to America,” the student told KFOR regarding the clip that focused on Native Americans.

“Why is it OK to demonize one race to children that you are supposed to be teaching a curriculum to?” asked the student’s father, whose face also was hidden and voice also was changed.

“You start telling someone something over and over again that’s an opinion, and they start taking it as fact,” the student added to the station. “So I wanted him to apologize and make it obvious and apparent to everyone that was his opinion.”

But countering her assertion were more than 100 Norman North students who held a silent protest in defense of the teacher — identified as James Coursey by the Norman Transcript — before classes began Tuesday morning. 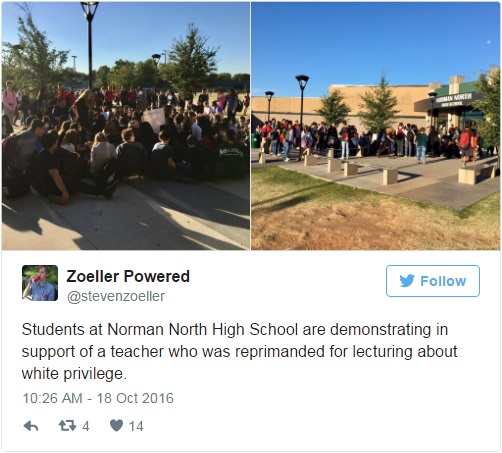 “I think it was a rookie error in teaching about race,” University of Oklahoma liberal studies professor Paul Ketchum told the Transcript. “You go for the big term when a less loaded term would be better to make it a teachable moment,” he continued. “That’s where this teacher’s going to face a lot of blowback, because most of the students at Norman North are white and come from white families. That’s why they might view this as an attack on them. And I get that. It’s statistically not correct, but I understand why they would react that way. My deepest sympathies to the teacher, because he is going to get hammered.”

“Racism is an important topic that we discuss in our schools. While discussing a variety of philosophical perspectives on culture, race and ethics, a teacher was attempting to convey to students in an elective philosophy course a perspective that had been shared at a university lecture he had attended. We regret that the discussion was poorly handled. When the district was notified of this concern it was immediately addressed. We are committed to ensuring inclusiveness in our schools.” — Dr. Joe Siano, superintendent of Norman Public Schools