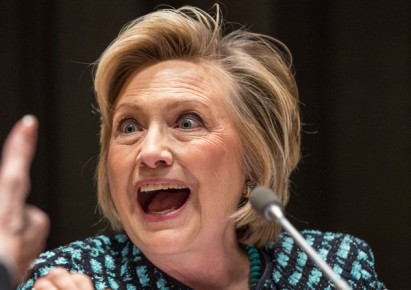 It isn’t easy being Hillary Clinton. Bernie Sanders is drawing big crowds. Pantsuits weren’t a staple on the Paris Fashion Week runways. Disgusting commoners want to touch you, and people want to know things about your email and Benghazi and all these things they were supposed to forget about once they were dazzled by Hillary Clinton’s wisdom and beauty.

And there’s only so much pandering you can do to target demographics. Keeping women, minorities, youth and small leftist special interest groups in line is only helpful if you have the majority of the Democratic base locked down, and its increasingly apparent that she doesn’t. As Bernie Sanders rants away, Hillary’s numbers are slipping, and her connection with the progressives that put Obama over the top only to see him govern as (mostly) a moderate, is tenuous at best. So what’s a girl to do?

Pander some more. This time, to Bernie’s base. America, you need a raise. Or something.

Hillary Clinton pledged to rein in out-of-control financial institutions on Monday as she detailed an economic vision that she said would achieve the “defining economic challenge of our life” of lifting middle-class wages.

The Democratic front-runner lambasted a marketplace she said is too obsessed with second-to-second stock trading and quarterly earnings reports, at the expense of long-term growth and stability…Clinton even took a veiled shot at President Barack Obama’s administration for failing to prosecute individuals for banking crimes in the wake of the 2008 economic downturn.

She accused hedge funds and high-frequency traders of “criminal behavior,” and promised to “prosecute individuals as well as firms” when they break the law — which liberals have long clamored for, but the Obama administration largely didn’t do. She also said she’d seek to expand on the 2010 Dodd-Frank financial regulatory law designed to prevent future economic crises.

So, Hillary will govern to the left of Barack Obama, right? I mean, she’s obviously not under the influence of any Wall Street banks, like President Obama is, thus freeing her to make the kind of drastic changes necessary to bust up those big business baddies…right?

Well, that depends on which big business baddies, we’re talking about. Hillary’s top ten donors are all on record, and an awful lot of them have some very familiar, very suspicious names. 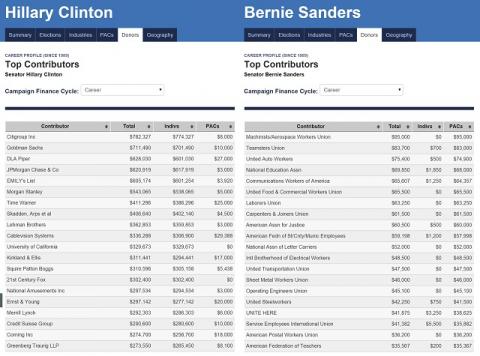 If the print is too small, here’s the rundown: #1 Citigroup (bank), #2 Goldman Sachs (bank), #4 JP Morgan Chase (bank), #6 Morgan Stanley (financial), and #9 Lehman Bros. (financial, largely considered to be one of the banks that got off scot-free despite it’s activities during the housing bubble, thanks to the previous administration). Rounding out the top are Merril Lynch, Credit Suisse and Ernst & Young, all of which are, at least, tangentially, involved in banking. Take it all into account, and you can see some major players against things like financial reform, tech freedom, copyright reform, scientific funding, college education funding, and otherwise – all of which are primary concerns of people ditching Hillary for Bernie. How do I know? The chart above came from Reddit’s r/socialism page.

And, if she’s taking that much cash, it’s not hard to believe that despite what she says, that she’ll aggressively go after the CEOs of each of these companies, entreating them to back down on their golden parachutes and private islands.

It’s also unlikely that she’ll stop any of them – especially the ones she named in her speech today, like HSBC – from donating to her family’s foundation. Hillary Clinton may not have personally profited from some of the banks she cited as predatory and open to criminal behavior, but the Clinton Foundation is at least $200,000 richer thanks to HSBC’s allegedly ill-gotten gains.

Maybe she can, at least, get them to wear pantsuits.