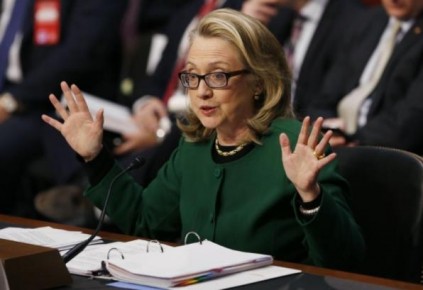 Former Secretary of State Hillary Clinton received information on her private email server about the deadly attack on U.S. diplomatic facilities in Benghazi that has now been classified.

The email in question, forwarded to Clinton by her deputy chief of staff, Jake Sullivan, relates to reports of arrests in Libya of possible suspects in the attack.

Because the information was not classified at the time the email was sent, no laws were violated. But Friday’s redaction shows that Clinton received information considered sensitive on her unsecured personal server, which came to light just as she was beginning her presidential campaign.

Clinton, campaigning in New Hampshire, said Friday she was aware that the FBI wanted some of the email to be classified, “but that doesn’t change the fact all of the information in the emails was handled appropriately.”

Asked if she was concerned it was on a private server, she replied, “No.”

The information was not classified at the time the email was sent but was upgraded from “unclassified” to “secret” on Friday at the request of the FBI, according to State Department officials, speaking on condition of anonymity because they weren’t authorized to discuss the decision. They said 23 words of the Nov. 18, 2012, message were redacted from Friday’s release of 296 emails totaling 896 pages to protect information that could harm national security and damage foreign relations.

Officials who received the email have been informed that the 23 words are now classified as “secret” and that they should take appropriate measures to protect it in any files they may have, the officials said.

No other redactions were made to the collection of Benghazi-related emails for classification reasons, the officials said. They added that the Justice Department had not raised classification concerns about the now-redacted 1 1/2 lines when the documents were turned over to the special House committee looking into the Benghazi attack in February. The committee retains a complete copy of the email, the officials said.

The email containing the now-classified information is at the end of a chain of communication that originated with Bill Roebuck, then director of the Office of Maghreb Affairs, that pointed out that Libyan police had arrested several people who might have connections to the attack. The redacted portion appears to relate to who provided the information about the alleged suspects to the Libyans. A total of five lines related to the source of the information were affected, but only the 23 words were deleted because the FBI deemed them to be classified.

“Post reports that Libyans police have arrested several people today who may/may have some connection to Benghazi attack. They were acting on information furnished by DS/RSO (Diplomatic Security/Regional Security Officer).” Then follow the five redacted lines. Then the email continues, “That may not materialize. Overall it could lead to something operationally, or not, and it could lead to some news reports from Libya saying there is a significant break in case, or not.”

Roebuck’s email was sent to a number of senior officials, including the former assistant secretary of state for near eastern affairs, Elizabeth Jones, who then sent it to Sullivan with the comment: “This is preliminary, but very interesting. FBI in Tripoli is fully involved.”

Sullivan then forwarded the email to Clinton with the comment: “fyi.”

There was no indication that Clinton herself forwarded the email.

Reaction from committee members to the release of the emails was swift and partisan.

Committee chairman Trey Gowdy, R-S.C., said the emails were incomplete, adding that it “strains credibility” to view them as a thorough record of Clinton’s tenure.

“To assume a self-selected public record is complete, when no one with a duty or responsibility to the public had the ability to take part in the selection, requires a leap in logic no impartial reviewer should be required to make,” Gowdy said.

Gowdy also said it was important to note that Clinton’s email messages are just one piece of information related to Benghazi and cannot be fully evaluated without other documents and emails from other top officials at the State Department.

“The committee is working to collect and evaluate all of the relevant and material information necessary to evaluate the full range of issues in context. We will not reach any investigative conclusions until our work is complete, but these emails continue to reinforce the fact that unresolved questions and issues remain as it relates to Benghazi,” Gowdy said.

Rep. Elijah Cummings of Maryland, senior Democrat on the Benghazi committee, said he was pleased that the State Department released the complete set of Clinton’s emails related to Benghazi, which Democrats requested months ago.

“Instead of the selective leaking that has happened so far, the American people can now read all of these emails and see for themselves that they contain no evidence to back up claims that Secretary Clinton ordered a stand-down, approved an illicit weapons program or any other wild allegation Republicans have made for years,” Cummings said.

He urged Republicans on the Benghazi panel to schedule Clinton’s public testimony and “stop wasting taxpayer money dragging out this political charade to harm Secretary Clinton’s bid for president.”