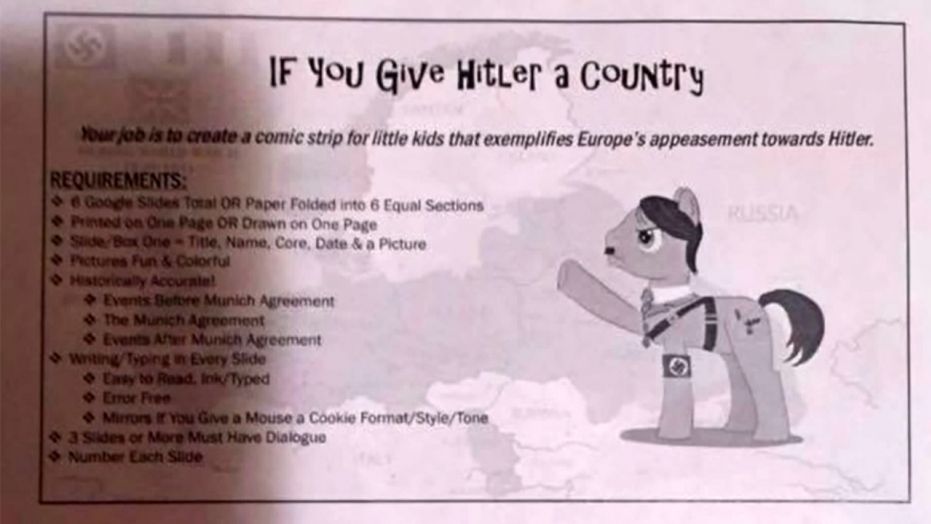 Parents at a middle school in Gurnee, Illinois, are upset after their kids received a controversial Hitler-themed assignment.

One mother said she was “flabbergasted” after she found SpongeBob SquarePants with swastikas in her son’s language arts homework online, Fox 43 reported.

Kelly Masterton told WGN her eighth grade son, Michael, was given the assignment at Woodland Middle School last week called “If You Give Hitler a Country” modeled after the children’s book, “If you give a mouse a cookie.” The assignment had a cartoon-like “My Little Pony” in a Nazi uniform saluting over a map of Europe.

The students were instructed to “create a comic strip for little kids that exemplifies Europe’s appeasement towards Hitler,” using “fun and colorful” pictures.

“I asked him ‘did you ask the teacher if you could use these images?’ and he said ‘yes,’” she said. “Not sure what’s an appropriate manner to use a swastika.”

Kelly posted a picture of the Hitler-themed homework on her Facebook page, prompting other parents to raise questions.