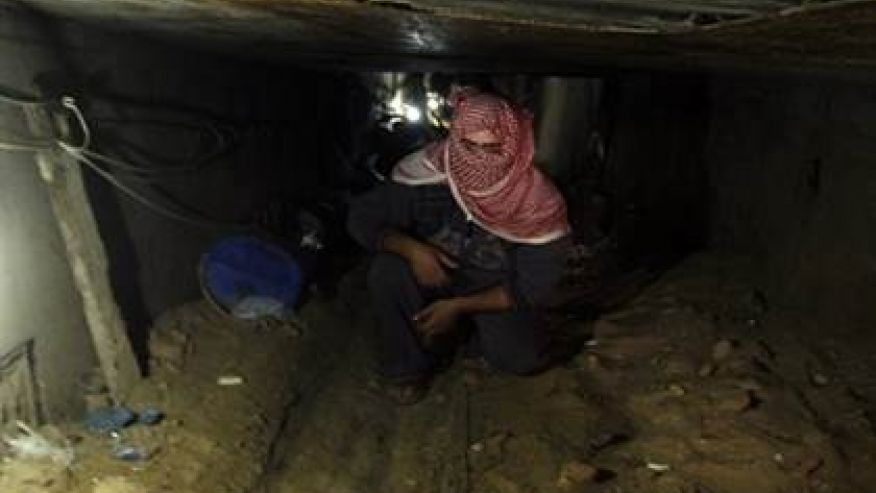 The tunnel from Gaza, which infiltrated about 200 meters into Israel and was located 2 km. from Kibbutz Kissufim, is believed by the IDF to have been intended to be used to attack Kissufim and/or abduct soldiers.

Several terrorists worked around the clock except on Fridays, digging between 10 and 20 meters a day, at a depth of 26 meters, aided by electricity, oxygen tanks to avoid suffocation and water. The Islamic Jihad men did not try to hide the sand they removed, creating large dunes on the Gazan side.

The tunnel was detected using newly implemented advanced technology, and was destroyed in a controlled explosion inside Israeli territory on October 31, but it remains open on the Gaza side, guarded by Hamas gunmen.

During the 2014 war (Operation Protective Edge), several soldiers were killed by Hamas terrorists when they emerged from the numerous tunnels they had dug into Israel, surprising the IDF and leaving the residents of border communities concerned about possible tunnels beneath their homes. By the time of the last cease-fire, the IDF said it had destroyed 32 tunnels that crossed under the border.

At least six tunnels have been destroyed since the end of the operation, four of them since the beginning of October alone.

The military has been investing extensive efforts in locating tunnels from the Gaza Strip, constructing a NIS 3 billion underground barrier to run along the entire border with the Hamas-run enclave.

The underground barrier is made from bentonite and is combined with large iron cages with water-resistant bars, and a system of advanced monitoring devices to detect tunnels. Above ground, a 6-meter-high fence will be built.

While the IDF is confident that no tunnel will be able to cross the underground barrier, most of the barrier remains to be built, including in the area where the tunnel destroyed in October was located.

A senior officer in the Southern Command said on Thursday that 4 kilometers of the barrier has been completed, and the rest is expected to be finished by 2019.

“By the end of the year we will finish over 50% of the barrier,” he said, adding that the IDF began building it in areas which were most at risk, such as near the city of Sderot, Moshav Netiv Ha’asara and Kibbutz Nahal Oz.

Hamas has accepted the fact that it has lost their strategic offensive tunnels with this project, the senior officer continued.

“The guillotine is working,” the senior officer said, adding that “it is possible that because of that, the group will invest its efforts and resources in other projects. It is that which I am concerned about.”

While the security establishment does not believe that Hamas wants another war with Israel right now, “the situation remains fragile,” the senior officer said.

The humanitarian situation in the Gaza Strip is the worst it has been in decades, he said. There is skyrocketing unemployment (46%), especially among youth, and those who do find work receive salaries that are just over $400 a month. Nearly 80% of Gaza residents receive some form of aid.

The Rafah crossing with Egypt was closed for 329 days in 2017, and the number of trucks entering from Israel via the Kerem Shalom crossing, the sole commercial crossing into the Strip, has dropped, from 800-1,200 trucks a day to 300-400 trucks.

Last week, the IDF destroyed a 180-meter-long Hamas attack tunnel that stretched into both Israel and Egypt under the Kerem Shalom crossing. While Hamas has tried to distance itself from responsibility for the tunnel, Israel has asserted that Hamas intended to use it to bring terrorists and weapons from Egypt into the Gaza Strip for an attack on the Kerem Shalom crossing, combined with an attack from the Egyptian side.

The Islamic Jihad tunnel destroyed on October 31 stretched 200 meters into Israel, while the tunnel under Kerem Shalom reached almost a kilometer into the country.

The senior officer said that the support Hamas receives from Iran, as well as the stalemate regarding the Israelis held in Gaza by the terrorist group, is not helping the situation.