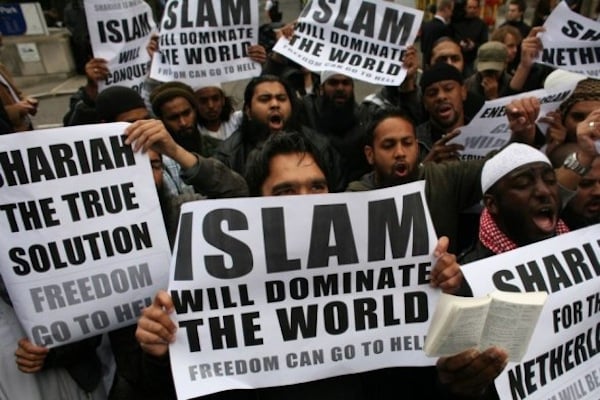 The anti-Semitic British Broadcasting Corporation (BBC) – a public broadcaster funded by a “TV licence” fee forced on UK television owners – has declared that resistance to Shariah law is “Islamophobic”.

According to a news clip, BBC online coverage, and the comments of its reporter Catrin Nye, a man called “Paul” approached a BBC film crew while recording an interview with Islam campaigner Ruqaiya Haris.

Ms. Haris, a Muslim activist and student at the School of Oriental and African Studies, is told by Paul, “There’s no Sharia law here”.

Her and Ms. Nye’s reactions to the statement made freely in a public place are nothing short of hysterical.

The clip opens with Ms. Haris openly stating that she doesn’t believe in condemning recent terror attacks. Her voice, solemn and almost bored, changes immediately when the man known as Paul confronts us.

Ms. Haris bolts up from her interview on a park bench as Ms. Nye glares in a disgusted manner at the man.

“I wasn’t talking to you,” says Paul, attempting to extricate himself from a situation where one of the world’s largest broadcasters now has its cameras turned on him while a Muslim woman and a BBC presenter scream questions at him.

He calmly states, in the awkwardly clipped BBC footage, “We’re losing our right to freedom of expression”.

“Why’s that?” asks Ms. Nye, moments after she attempted to shout him down.

The man remains seated in the grass and you can see in the reflection in his sunglasses there are at least three people standing over him, filming and firing questions.

The BBC then clipped its footage of the incident, uploaded it to its website and social media channels, and headlined it: “BBC Islamophobia discussion interrupted by Islamophobia”.

The BBC refused to provide Breitbart London with the unedited footage of the incident. There is no indication as to what was “Islamophobic” about the man’s comments, leading social media users to believe that the BBC’s position on Islamophobia is now opposition to Shariah law.

Ms. Haris told the Express newspaper: “I receive abuse online pretty much every day regardless of what I say, insulting my hijab or throwing out stereotypes and insults”.

But insulting the hijab is also hardly Islamophobic. Indeed many in the West see the hijab as a symbol of oppression against women, and in opposing it are simply standing up for classical liberal, Western values.

But Mr. Haris’s own Twitter stream features a litany of anti-Western and anti-White abuse. She frequently engages in tirades at other Twitter users, as well as blaming white people for global ills – a similar stereotype to the ones she opposes when claiming that not all Muslims should be held to the actions of Islamic terrorists.

On her Twitter account, Mr. Haris admits to having “lost it” with Paul in the park, adding: “he was irritating me big time”.

But the BBC did not headline its coverage, “Muslim Activist ‘Loses It’ With ‘Irritating Man’” instead aiming to stoke the fires of “Islamophobia” in Britain.

She has also said she has “very little desire to prove my humanity/the humanity of all Muslims to people”.