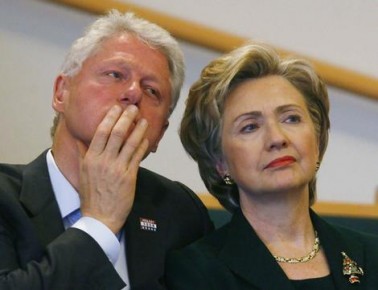 Former President Bill Clinton and daughter Chelsea left earlier this week on a nine-day tour through Africa with a plane-full of family foundation donors and Hillary Clinton supporters in tow, adding jet fuel to accusations that contributors are getting rewarded — and courted for even more money.

Those on the four-country tour are expected to observe foreign projects the Clinton Global Initiative has backed connected to health care, global warming, wildlife protection, education and agriculture.

While foundation aides tout their many successful initiatives in Africa, the trip comes amid the growing controversy over donations to the Clinton family’s foundation. Conservative critics suggest this is yet another example of donors — to both the foundation and Hillary Clinton’s campaign — getting something in return.

“If hopping on a private jet so you can go on safari with a bunch of rich celebrities now counts as charity work, then the Kardashian sisters should probably be eligible for sainthood,” said Sean Davis, co-founder of conservative online magazine, The Federalist.

Further, the trip has fueled concerns that such donors are being primed for 2016 fundraising and would be a favored class if the former secretary of state wins the presidency. Jeff Bechdel, spokesman for the conservative America Rising PAC, said he expects “many of the donors on this trip” to show up as Clinton 2016 campaign contributors.

The Clintons have brought along 20 close allies, including donors who have given hundreds of thousands of dollars — and in some cases millions of dollars — to family foundation entities. There also are major Hillary Clinton backers who put their money and reputation behind her effort to win the presidency in 2008 and are expected to support her again in 2016.

Those touring with the Clintons — according to a list released to Politico, but which the foundation refused to provide to Fox News — are:

After leaving Tuesday, they plan to visit Tanzania, Kenya, Liberia and Morocco. Foundation representatives have defended the trip and the work in Africa, touting the good the organization has done around the world.

This includes working with 85,000 small farmers in Malawi, Rwanda and Tanzania to help them improve their yields; launching and operating a vaccine program in Tanzania to ensure children are protected from preventable diseases and helping to ensure proper storage of those vaccines; and collecting data on the status of women and girls in Africa to create a roadmap to empower and educate women and girls.

Craig Minassian, spokesman for the Clinton Foundation, told reporters on an April 23 conference call that the trip to Africa has nothing to do with politics. He said this is the 12th time the president has visited Africa, and this is a nearly annual trip that he, and more recently Chelsea, take to visit the work the foundation does. Philanthropists come along, he said, to “make sure their work is running and doing well and to check in on the far-flung staff we have doing the good work all over the world.”

But conservative detractors see a pattern of favor-trading. “The Clintons have perfected the technique of monetizing every aspect of their public lives for their personal financial benefit,” said Chris Farrell, director of research for the Washington D.C.-based conservative watchdog Judicial Watch. “They blur every line.”

Another member of the delegation to Africa is Hadeel Ibrahim, a Clinton Foundation board member, and the founding executive director of the Mo Ibrahim Foundation, an organization established in 2006 to support leadership and governance in Africa. Ibrahim is a friend of Chelsea Clinton. Her family foundation donated between $250,000 and $500,000 to the Clinton Foundation. Chelsea Clinton and Ibrahim co-chair on the Board of Trustees for The Africa Center in New York City.

Also on the trip are:

The foundation has come under fire in recent weeks, after revelations in the soon-to-be-released book, “Clinton Cash,” by Peter Schweizer, have spurred numerous media investigations into the relationship between Clinton’s tenure as secretary of state, the foundation’s solicitation of foreign money and the ex-president’s lucrative speaking engagements around the world.

For instance, the charity accepted millions of dollars from the head of Uranium One, while the Russians sought approval from U.S. agencies, including the State Department, to take over the company. (The Clinton campaign said there’s no evidence Clinton ever took action as secretary to support the interests of foundation donors.)

Critics also have said the charity run by the Clintons has raised $2 billion since it was founded in 2001 — $144.3 million in 2013 alone — but only 10 percent of the take went to its “life-saving work” in 2013, and the rest mostly to salaries, benefits, travel and fund-raising.

CharityNavigator.org added the Clinton Foundation to its “watchlist,” noting the organization officials “had previously evaluated this organization, but have since determined that this charity’s atypical business model cannot be accurately captured in our current rating methodology.”

Michael Boland, founder of Dome Advisors LLC and former chief counsel to Rep. Trent Lott, who has decades of experience working in senior political positions with Republicans on Capitol Hill, said Hillary Clinton and her family foundation are in a crisis, with major donors to the foundation and supporters of her campaign in the business community losing confidence.

“I can tell you in talking to Democrats and independents, their confidence in Hillary Clinton is shaken,” Boland said.

The foundation itself has vowed more transparency going forward.

To clear up any of the public’s concerns about the family’s management of the foundation finances, Boland said the Clintons should immediately conduct a third-party independent audit of all foundation entities and report to the public every single expense and where every dollar has come from.

Boland said: “At this point Hillary Clinton needs to decide which road she is on. If she is running for president, she should consider closing the foundation and taking Bill Clinton off of the speaking circuit. Her quest for The White House and continuation of the Clinton Foundation are directly competing with each other.”