Matt Drudge to Trump: “The Swamp Drains You”

Matt Drudge was one of the biggest Donald Trump supporters during the campaign, but it looks like he has changed his mind. We told you so, Matt Drudge.

Matt Drudge issued a rare tweet on Thursday that appears to be a cryptic reference to President Trump, whom he staunchly supported during the presidential race.

“The swamp drains you,” the online news mogul tweeted to his hundreds of thousands of followers. 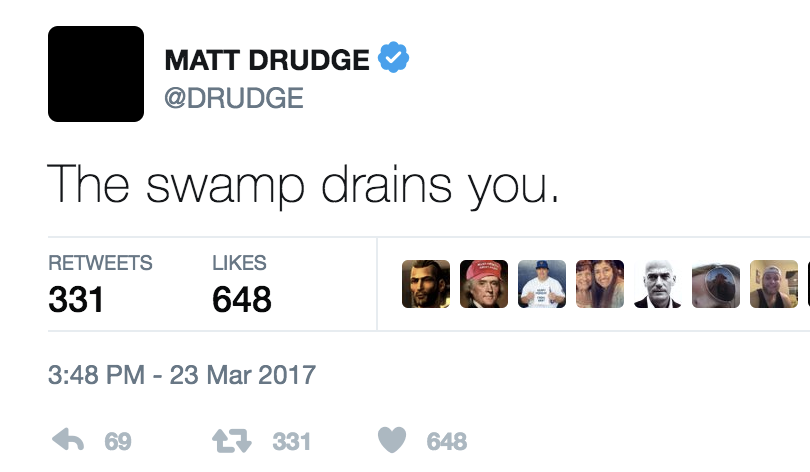 Drudge’s tweet alludes to “Drain the swamp,” a mantra of the Trump campaign in its closing months that the candidate used to promise to take on corruption and the Washington establishment.

But Drudge’s tweet comes as Trump finds himself tied to the American Health Care Act, House Republicans’ ObamaCare repeal and replacement bill that faces opposition within the GOP from both conservatives and moderates. Trump has tried to gather support for the bill ahead of a vote scheduled for today, but it’s unclear whether the vote will happen.

Drudge has been relatively more active on Twitter since Trump’s inauguration on Jan. 20, primarily deriding Republicans on Capitol Hill for not pushing tax cuts and reform through faster.

The 51-year-old Drudge always deletes his tweets a few hours after posting them. While Drudge has nearly 500,000 of followers on Twitter, he doesn’t follow anyone on the site.