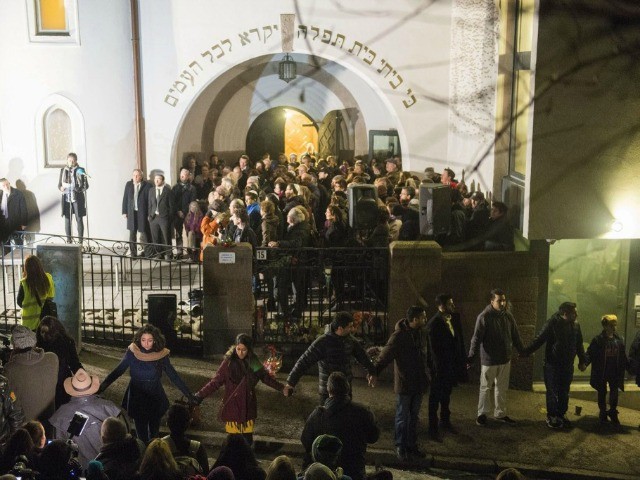 The weekend’s feel-good story about a Muslim “ring of peace” formed to “protect” Jews at an Oslo synagogue turned out to be a complete fabrication by the media, according to an eyewitness report, local officials, and attendees’ photos.

Before reading the article below, it must be noted that even the few Muslims who showed up for this hoax are actually involved in anti-Semitic and anti-Israel organizations.

According to a local eyewitness, only about 20 or so Muslims formed the “ring of peace” around the Oslo synagogue. In fact, pictures from multiple angles show that there wasn’t enough people to form a ring, so the locals instead formed a horizontal line in front of the synagogue.

A local news outlet explained how the media got to its “1,300 Muslims” number. “According to police, there were 1300 persons present in the event. Very many of them ethnic Norwegians,” read a translated report from Osloby.no.

Demonstrators also reportedly chanted, “No to anti-Semitism, no to Islamophobia,” conflating criticism of Islam and hatred of Jews.

Photos pulled off of social media appear to corroborate the narrative that only twenty or so people formed the “peace ring.”

1300 Muslims link hands in Ring of Peace around Jewish synagogue in Oslo. This deserves RT, not ISIS atrocities. pic.twitter.com/ALqB6m0cFd

Multiple news outlets, including wire services for hundreds of news sites, ran with the false narrative that 1,000 or more people–sometimes all of them Muslim–formed the ring of peace outside of the Oslo synagogue.

The AP incorrectly reported, “More than 1,000 people have formed a ‘ring of peace’ outside Oslo’s main synagogue at the initiative of a group of young Muslims.”

AFP reports almost identically, “More than 1,000 people formed a ‘ring of peace’ Saturday outside Oslo’s main synagogue at the initiative of a group of young Muslims.” The newswire agency has no excuse for the false report, as it had a photographer taking shots of the “ring” at the scene–and one shows a man who appears to be at the end of the line of hand-holders, with his left hand in his pocket.

Reuters reported, “More than 1000 Muslims formed a human shield around Oslo’s synagogue on Saturday, offering symbolic protection for the city’s Jewish community and condemning an attack on a synagogue in neighboring Denmark last weekend.”

Even Radio Free Europe/Radio Liberty reported, “More than 1,000 Muslims formed a human shield around an Oslo synagogue on February 21, offering symbolic protection for the city’s Jewish community and condemning an attack on a synagogue in neighboring Denmark the previous weekend.”

In even worse news, it appears as if the organizer of the Muslim “peace ring” is a virulent anti-Semite, 9/11 truther, a gay-basher, and an Israel-hater.

Ali Chishti, who organized the event, said bluntly in 2008, “I hate Jews and how they operate,” reports Daniel Greenfield. Chishti added in his conspiracy-laden rant about the Jewish people, “It is a fact that during the attacks on the Twin Towers [World Trade Center] 1600 Jews were absent from work. OK, OK, what’s even more suspicious, is how unusually many Jews there were present in Mumbai on the day that Pakistani terrorists struck. How come?”

At a March, 2008 meeting in Oslo promoting his 9/11 conspiracy theory that the Jews were responsible for the World Trade Center attacks, Chishti read his speech titled, “Therefore I Hate Jews And Gays,” Haaretz reports.

As it turns out, as many as 40 times more Northern European Muslims attended the funeral of a Copenhagen Muslim terrorist than those who decided to form the non-existent “ring of peace” around an Oslo synagogue.