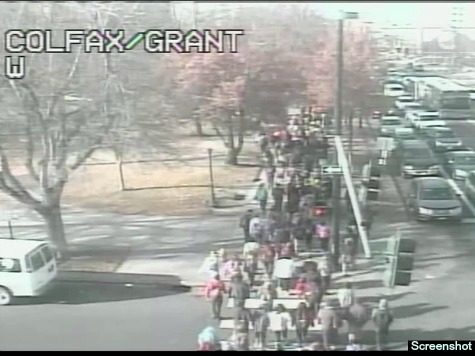 According to KWGN, one of the four officers–John Adsit–“spent six hours in surgery” on December 3, then underwent more surgery the following day.

A large contingent of the demonstrators were students who walked out of East High School to take part, and unnamed police officers say the students were the ones “cheering and chanting” when the officers were hit. The Denver police union said “several parties in the protesting group cheered and chanted ‘hit him again'” after the incident and called the jeering “not only reprehensible but quite possibly the most disturbing thing this Association has ever heard.”

A student present at the demonstrations countered the claim that students were cheering, saying the chants came from “older men who had joined the protest.”

Denver Public Schools (DPS) officials said the students’ decision to walk out of school and join the protests is a “learning experience,” and the students will not be prohibited from taking part in such experiences.

This group of high school students not only broke DPS rules by leaving school without authorization, but broke laws of the City and County of Denver and State of Colorado regarding traffic regulations and the right to assemble with a permit. The DPPA recognizes citizens’ rights to assemble lawfully. This, however, was not a lawful assembly, which ultimately cost four Denver Police Officers a trip to the hospital. One of which is in critical condition.