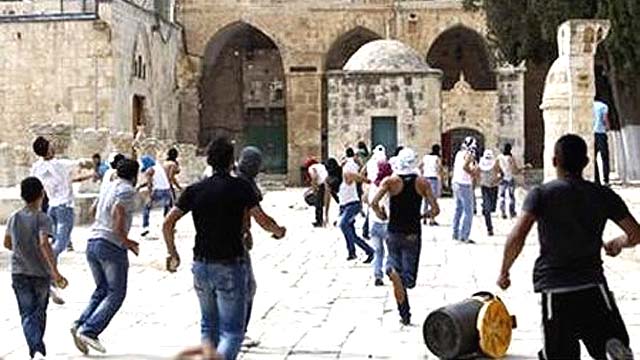 Once the Arab Muslims learned that terrorism works due to Netanyahu, they decided to continue their violence and riots.

Arabs attacked Israeli police on the Temple Mount Thursday as Muslim worshipers returned to the holy site after a 10-day boycott to protest Israeli security measures.

Livestreamed footage taken from the Mount of Olives, overlooking the Temple mount, showed thousands of people milling around the site, with the sounds of gunshots and ambulance sirens clearly heard.

The clashes took place hours after Islamic authorities who are responsible for maintenance at the Dome of the Rock and Al-Aqsa Mosque agreed to call off the boycott after Israeli authorities dismantled security cameras and metal detectors at entrances to the Mount.

The security measures were introduced following the murder of two police officers near the Lion’s Gate area of the compound by three Israeli-Arabs who emerged from the Al Aqsa mosque within the Temple Mount on July 14.

Late Thursday afternoon new protests began in the Bab Hutta neighborhood, in the Muslim Quarter of the Old City, when a gate leading from the neighborhood to the Mount was closed; the gate was later opened, allowing hundreds of Muslims to pour through and into the compound.

18:55 At least 56 people have been injured in the attacks against Israeli police, and the subsequent response by security personnel on the Temple Mount.

18:24 The most recent count is 46 people wounded in the clashes, according to local sources.

17:28 At least 38 people have been wounded in the clashes, according to the Palestinian Red Crescent Society

17:54 Sources in the Old City said that police have closed Damascus and Flower gates to the Old City. It has been impossible to independently confirm that report.