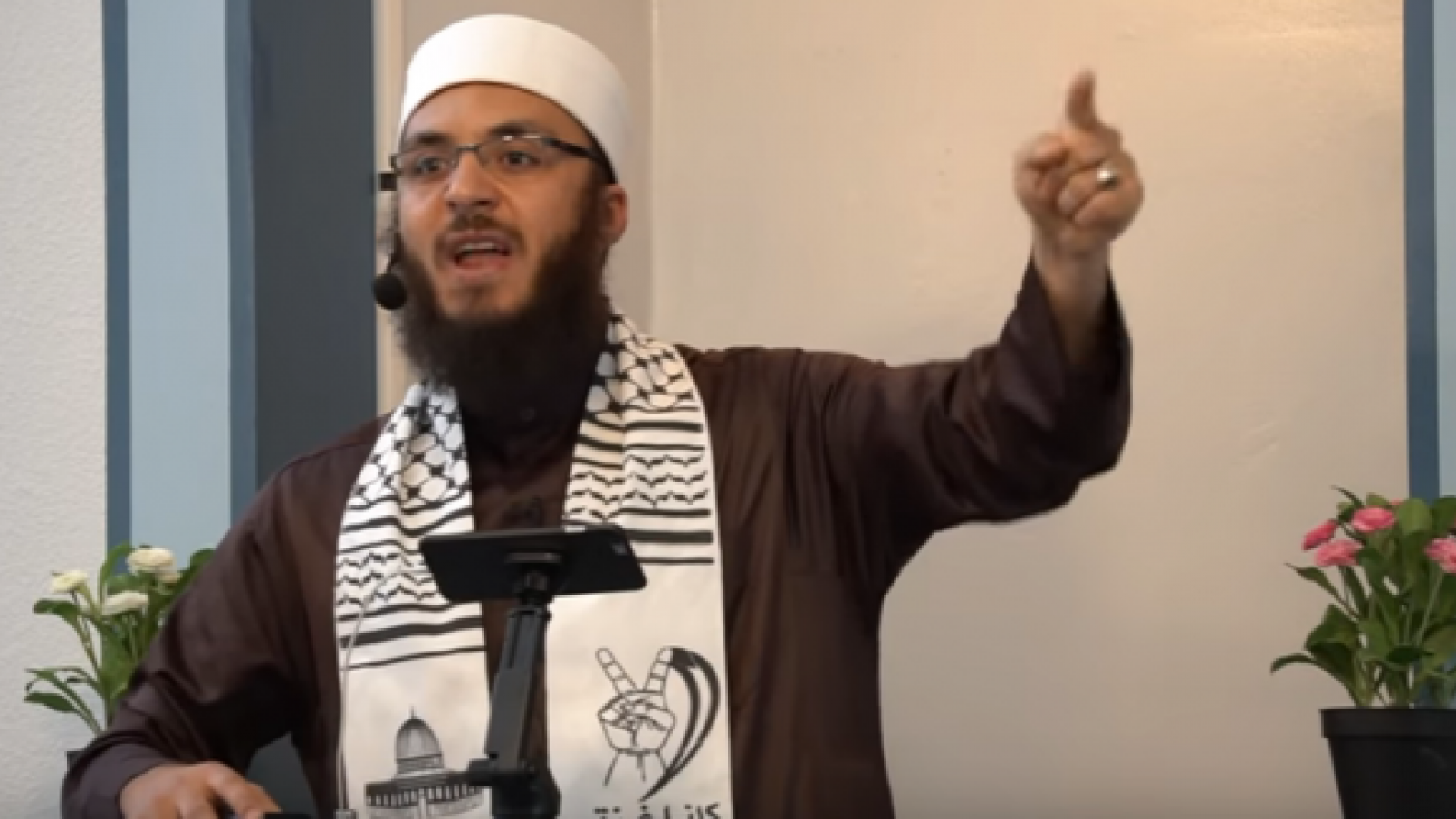 There are countless Mosques teaching their fellow Muslims to kill Jews and infidels.

It was another Friday night in the Islamic Center of Jersey City. And its imam, Sheikh Aymen Elkasaby, had some thoughts about the Jews.

“So long as the Al-Aqsa Mosque remains a humiliated prisoner under the oppression of the Jews, this nation will never prevail,” he screamed belligerently in the World Trade Center bomber’s old mosque.

“Count them one by one, and kill them down to the very last one. Do not leave a single one on the face of the Earth.”

“Kill the Jews” is as much a standard at Friday night mosque services as Springsteen’s Born to Run is on Friday night in bars well downwind of the Islamic Center of Jersey City. But the politicians who stop by the mosques before elections have to pretend that they’re shocked at all the gambling going on.

The Islamic Center of Jersey City’s  president had been a member of the New Jersey Homeland Security Interfaith Advisory Council. Senator Cory Booker had invited him as a guest to the State of the Union and praised him as an example “of how the diversity of America makes us all better.”

Was his imam calling the Jews “apes and pigs” really making us all better? And if the Islamic Center of Jersey City wasn’t making America better with its diversity, then just maybe neither was Senator Cory Booker, the Democrats and their entire Islamic immigration program.

Senator Booker demanded that the mosque disavow its imam and the mosque’s president gaslit the media by claiming that his imam had the wrong idea about Islam and had been misunderstood.

On another Friday this year, in the Islamic Center of Davis, Imam Ammar Shahin implored, “Oh Allah, liberate the Al-Aqsa Mosque from the filth of the Jews.”

“Oh Allah, count them one by one and annihilate them down to the very last one.”

Both Islamic Centers were preparing their defenses from the same script. They blamed the emotions of their murderous clerics. The actual apologies amounted to, “We’re sorry you misunderstood our death threats.” But both imams were also offering the same genocidal prayer. And that’s because they were both quoting the same Islamic hadith involving a ‘martyred’ Islamic Jihadist cursing his non-Muslim foes.

Hamas has repeatedly made use of his prayer by calling for the extermination of the Jews and Christians. Hamas’ Acting Speaker of the Palestinian Legislative Council had prayed, “Oh Allah, vanquish the Jews and their supporters. Oh Allah, vanquish the Americans and their supporters. Oh Allah, count their numbers, and kill them all, down to the very last one.”

There was no misunderstanding. No one misspoke.

Why would an imam at the Islamic Center of Jersey City echo Hamas? For over a decade, the director of the Islamic Center had been Mohammad Al-Hanooti. Al-Hanooti was an unindicted co-conspirator in the World Trade Center bombing. The FBI’s counterterrorism director had described him as a “big supporter” of Hamas who had helped raise $6 million for the Islamic terror group.

That’s information that politicians like Senator Booker like to ignore. And then they pretend to be shocked that there’s Jihad going on at an Islamic Center formerly headed up by a Hamas fundraiser.

A few days before the failed suicide bombing in Times Square, imam Qatanani of the Islamic Center of Passaic Country had called for a new intifada and led a “blood and souls” chant in Times Square. Imam Qatanani was an accused Hamas member. His predecessor at the Islamic Center, Mohammad El-Mezai, had been convicted of funneling money to Hamas. Qatanani was able to avoid deportation because of the intervention of a roster of New Jersey pols. Including Chris Christie, who kissed him on the cheek.

Two Jersey sheriffs claimed, “I feel better as a person to be with him” and that the Hamas member “radiates peace.” Cory Booker had attended an anti-Trump protest with him.

And the Times Square Bomber’s brother prayed at the Masjid Al-Salam mosque in Jersey City. That’s the mosque where the Blind Sheikh used to preach. The Sheikh’s followers had carried out the World Trade Center bombing and plotted numerous attacks across New York City. Masjid Al-Salam was also where locals reported Muslims celebrating after 9/11.

Time will pass and it will be business as usual. Just ask Imam Qatanani.

A mosque can have persistent connections to terrorism, its leaders can be terrorists and politicians will still flock to kiss its imam on the cheek.

That is a big part of why Islamic terrorism continues to be a problem.

Under Bush, the FBI and DOJ went after the big game. Government raids struck at the heart of the Muslim Brotherhood’s operation in America. And then it all went away. Under Obama, law enforcement was retasked to fight the political opposition, whether it was monitoring returning veterans or spying on Trump officials. Counterterrorism was confined to going after lone Al Qaeda and ISIS supporters while the Muslim Brotherhood was integrated into the community policing version of counterterrorism.

Mosques with close links to the World Trade Center bombing, to 9/11 and to Hamas terror finance stayed in business. The Nazi mosques thrived. And they produced a new generation of ‘lone wolves.’

The lone wolf myth is tied to the myth of ‘internet radicalization’ that is detached from any local Islamic institution. Obama’s counterterrorism contended that the local mosque was the best defense against ‘radicalization’. Even if the corner mosque preached a certain amount of terrorism, that was okay.

The corner mosque was the methadone clinic while ISIS was the crack dealer. It would be better for the kids if they got some moderate terrorist agitprop at the local mosque instead of going full Al Qaeda. Unless the mosque was actually the gateway drug and ISIS was just the overdose.

The moderate methadone clinic philosophy is what led to the hundreds of thousands dead in the Arab Spring. What began with the Muslim Brotherhood’s “political Islam” ended in a real Islamic State with sex slaves, brutal torture and genocide. The Muslim Brotherhood’s methadone clinic isn’t how you get off the drug. It’s how you get on it. And the drug is Islamic supremacism, violence and terrorism.

Meanwhile terror mosques continue to enjoy influence and access in America. But then there are the awkward moments when in between the interfaith sessions, the mosques get caught preaching the extermination of the Jews. The mosque leaders mumble something about a misunderstanding. There’s another interfaith session in which leftist Jewish and Christian clergy overlook the calls to genocide and commit to a common struggle against President Trump while chanting, “No Muslim Ban!”

And then on another Friday in Jersey City, Davis or somewhere else, it happens again. “Count them one by one, and kill them down to the very last one.”