Netanyahu making “deal” with terrorist Turkey; Turkey is no friend of Israel or the United States 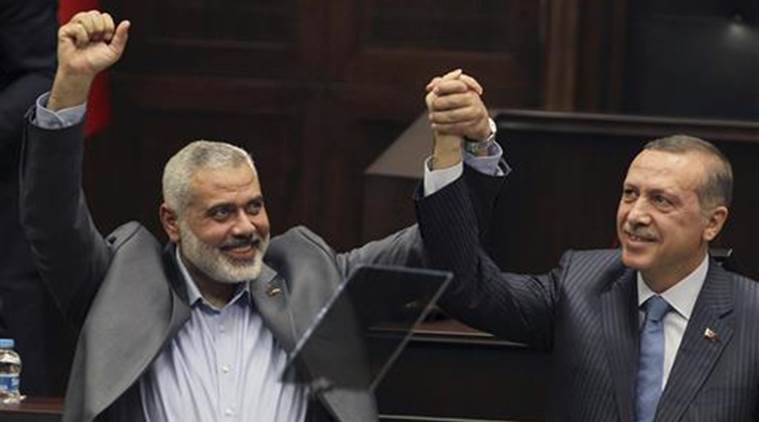 Terrorist Hamas leader Ismail Haniyeh, left, and then Turkish Prime Minister Recep Tayyip Erdogan, salute together the lawmakers and supporters of Erdogan’s Islamic Party at the Parliament in Ankara.

Speaking after meeting US Secretary of State John Kerry in Rome, Netanyahu said the agreement, announced by Israeli and Turkish officials on Sunday, was “an important step”.

There is no reason to believe that Turkey’s facilitation of ISIS operations in the region, and its link to ISIS both economically and politically, will cease.

With Turkish Prime Minister Ahmet Davutoglu announcing that he would step down at the end of the month due to a falling-out with the Turkish president, it is very unlikely that a major shift in Turkish foreign policy will take place anytime soon. This move is expected to grant even more powers to Turkey’s increasingly autocratic president, Recep Tayyip Erdoğan, who cited Nazi Germany as an example of effective governance that he sought to establish in his own country. Expect an imminent government purge of at least 1,800 members of the current leadership to include Defense Security Staff members who have sided with the outgoing prime minister.  The reality is that not much action is expected by the Turkish military on behalf of Davutoglu.

It is important to understand that Turkey’s reasons for this foreign policy are deeply rooted in the history and geography of the country itself. According to Lt. Col. Sargis Sangari, Chief Executive Officer of the Near East Center for Strategic Engagement, Turkey still views as its historical property the territories it once held as part of the Ottoman Empire.

“These created Sunni states which were established as part of the Sykes-Picot Agreement consider Turkey as a ‘big brother,’ as a competitor in the region and on the global stage, a hated competitor,” said Sangari. “Turkey looks at the Arabs and other Sunnis to include Kurds as its previously owned subjects, who now control the oil and resources of those lands, while Turkey has no natural resources within its borders to allow itself to be stable and truly independent geopolitically and to compete globally with the EU, other Western countries and Russia.”

“Internally, Turkey has a problem with its populace, given that their government is blamed for losing these territories and its inability to reclaim economic, political, and religious influence over the same Arabs it looks down on. This is why civilian governments in Turkey do not have the support they need to be successful, while the military has played a popular role in Turkey’s history,” said Sangari.

It also doesn’t help that Turkey is currently experiencing a major economic downturn. In January, it was reported by The Guardian that Turkey expected to lose 4.5 million Russian tourists this year, after Russia banned tours to the country. Tourism accounts for 11 percent of Turkey’s GDP, with Russians serving as the country’s second-largest tourist group. According to The Wall Street Journal, “hundreds of hotels, bed-and-breakfasts, and boutique resorts have been put up for sale” in Turkey. This came as a consequence of Turkish F-16s shooting down a Russian military jet along the Syrian border.

“Agriculture in Turkey is dying on the vine,” said Sangari. The food that has been produced is now an economic loss.” Turkish Agricultural Minister Faruk Çelik estimated that Russian sanctions will cost Turkey an annual $765 million worth of food exports.

Sangari explained that there was also a religious dimension to this historical resentment, which must be taken into account.

“Turkey wants to be the leader of Islam, given it believes itself to be the guardian of Islam as the Sultan was,” said Sangari. “Now, Saudi Arabia is in the lead of Islam, holding Mecca and Medina while being a major oil power in the region.”

It is because of these religious, historical, and geographic realities that Turkey acts like a bully in the region. Turkey does it in order to ensure its survival. This explains why it sometimes acts against American interests. Its use of the Syrian refugees as a weapon against Europe will only get worse now. Starting this month, millions of Turkish citizens will be permitted to travel visa-free to Europe, in exchange for Turkey’s “help” in stopping the migrant crisis. There is no reason to believe that Turkey’s use of Syrian refugees as a form of extortion against Europe will stop.

“Once ISIS falls, more documents will be revealed detailing the relationship between ISIS and Turkey, no different than what was revealed with the death of Abu Sayyaf, where it was revealed that Turkey was buying stolen oil from ISIS for $1 a barrel, in turn selling it to Europe for $20 a barrel,” said Sangari.

The Delta Force raid on Abu Sayyaf’s compound has found undeniable links between Turkish officials and the Islamic State. ISIS makes up to $10 million a month selling oil on black markets, aboutthree times as much as previously thought.

Turkey has proven itself to be a bad partner for NATO and has not treated Israel any better. In 2013, Turkey divulged to Iran the identities of up to ten Iranian citizens who were spying for Israel and gathering information on Iran’s nuclear weapons program. Former Chief of the Mossad, Danny Yatom, described this incident as a major blow against Western agencies trying to gather intelligence on an Iranian nuclear bomb.

If Turkey has proven itself to always be on the wrong side with its foreign policy and be a headache for its allies, should Israel dedicate its time, resources and other efforts to strengthening its relationship with Turkey?

As Israel struggles to answer this question, in light of Turkey’s current and historical role in the region, Israel needs to consider the problems the United States and NATO have experienced with regard to their ties with Turkey.