Obama Administration Will Sign Nuclear Deal “At Any Cost” 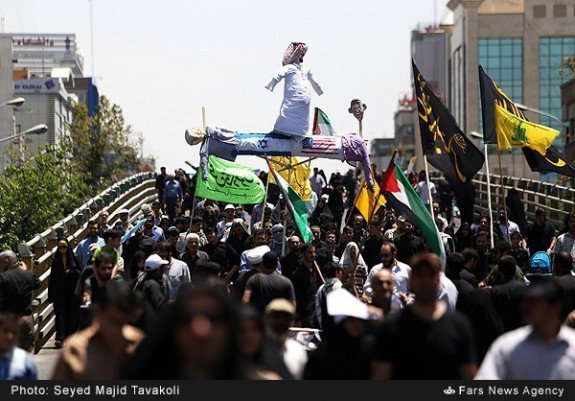 Massive crowds chanted “Death to America” and “Death to Israel” in Iran’s capital on Friday.

The protesters carried an effigy of Barack Obama at the rally.

Then they torched it on the ground.

Despite the continued threats from Tehran, the Obama administration and world powers continue to offer concession after concession to the Iranian nuclear negotiating team.

Today Benjamin Netanyahu accused the Obama administration of being willing to sign a nuclear deal at any cost.

The Times of Israel reported:

Prime Minister Netanyahu says that as Iran was welcoming the world’s concessions at the negotiating table, Iranian President Rouhani led a parade of hate in the streets of Tehran, where the masses shouted “Death to America,” and “Death to Israel.”

“Even if after these unequivocal calls to destroy those who negotiate with them, they continue with concession. It seems like some will sign the deal at any cost – and there is neither a will nor a way to avoid this bad agreement,” Netanyahu says at the Likud faction meeting.

“In any case, we did not pledge to avoid or prevent a deal, certainly not one the world’s powers are willing to sign at any price. We did pledge to prevent Iran from acquiring nuclear weapons – and indeed, were it not for our efforts, Iran would have had the bomb a long time ago,” Netanyahu adds.

“Our commitment to prevent Iran from acquiring nukes is in force today more than ever, and I call on anyone who holds the security of Israel dear to stand behind this commitment.”