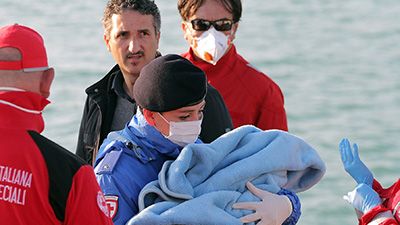 [Yahoo! News] – Italy’s migration crisis took on a deadly new twist Thursday as police in Sicily reported that Muslim migrants had thrown 12 Christians overboard during a recent crossing from Libya, and an aid group said another 41 were feared drowned in a separate incident.

Palermo police said they had detained 15 people suspected in the high seas assault, which they learned of while interviewing tearful survivors from Nigeria and Ghana who had arrived in Palermo Wednesday morning after being rescued at sea by the ship Ellensborg.

The 15 were accused of multiple homicide aggravated by religious hatred, police said in a statement.

The survivors said they had boarded a rubber boat April 14 on the Libyan coast with 105 passengers aboard, part of the wave of migrants taking advantage of calm seas and warm weather to make the risky crossing from Libya, where most smuggling operations originate.

During the crossing, the migrants from Nigeria and Ghana — believed to be Christians — were threatened with being abandoned at sea by some 15 other passengers from the Ivory Coast, Senegal, Mali and Guinea Bissau.

Eventually the threat was carried out and 12 were pushed overboard. The statement said the motive was that the victims “professed the Christian faith while the aggressors were Muslim.”

The surviving Christians, the statement said, only managed to stay on board by forming a “human chain” to resist the assault.

Earlier Thursday, the International Organization of Migration said four migrants who were picked up in recent days by the Italian Navy reported a shipwreck to aid workers after arriving in the Italian port of Trapani Thursday. Their boat had originally been carrying 45 people; the others are presumed dead.