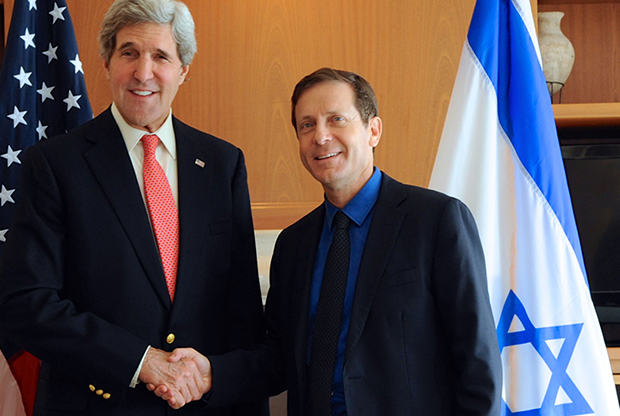 A paper of understanding that was exposed Sunday night by Channel 10 News shows that MK Isaac Herzog, who conducted extensive meetings with PLO chairman Mahmoud Abbas before the March 2015 elections, agreed to hand over all of Judea, Samaria and eastern Jerusalem to a [so-called] “Palestinian” State, and reached a deal on letting Arab refugees come back to live inside 1967 Israel.

The negotiations with Abbas were conducted in secret between retired Brigadier General and former MK and Minister Ephraim Sneh and a senior PA official. It should be noted that during the weeks just before the March 17 elections, the polls showed the Zionist Camp edging out Prime Minister Netanyahu’s Likud party, and the plan back then was seen as the shape of things to come in the most realistic way.

On the issue of the borders between Israel and Palestine, Herzog agreed to giving up 100% of the post 1967 territories, with an allowance for a mere 4% of Israeli settlements staying put in exchange for comparable land in pre-1967 Israel to be handed to the Palestinians. Eastern Jerusalem was going to become the capital of Palestine, but the two halves of the city would share municipal responsibilities. Temple Mount would be turned over to an international monitoring force, but Israel would have retained its hold on the Western Wall.

The Arab refugees were going to be taken care of based on UN resolution 194, with some being allowed back into Israel and the rest receiving financial compensation for the lands they left behind.

Israel was going to maintain a symbolic presence in the Jordan Valley, including two armored bases, and terrorism would be handled by a combined force made up of Jordanians, Palestinians and Israelis.

In response to the revelation, MK Herzog’s office released a statement saying, “In my contacts with the Palestinian Authority Chairman in 2014 I made an effort to reach understandings that would have prevented the wave of terror which I predicted, just as I am working now to prevent a situation where the abandoning of a regional conference on the part of the extreme right-wing government won’t bring on us the next war. After the rounds of the almost annual wars and funerals of the past decade I am no longer prepared to listen to the mantra that says we can defeat every threat with only military force.”

Minister Ze’ev Elkin said in response to the revelations that “an abyss separates us and them and they have no place in a Liked led government.”