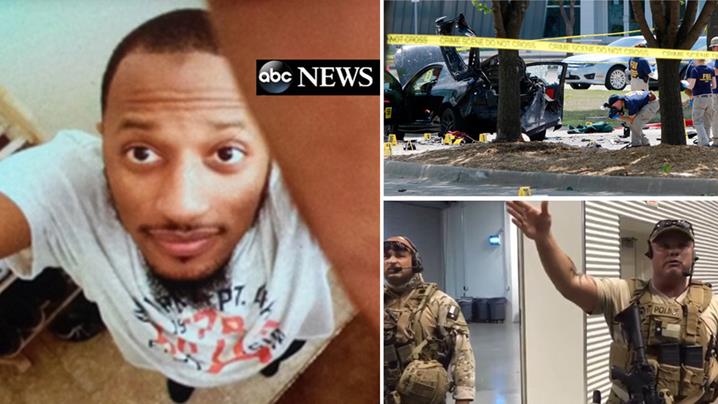 The two men who opened fire on a security guard at an anti-Muslim event in Garland, Texas, Sunday were Islamic terrorist wannabes, and one, Elton Simpson, had been in the FBI’s crosshairs for nearly eight years.

Simpson, 30, known to friends as Ibrahim, and his roommate, Nadir Soofi, 24, were gunned down by police after shooting a security guard in the ankle at an anti-Islamic cartoonist competition to draw caricatures of the Prophet Mohammed, an act considered blasphemy by Muslims, the Daily Mail reported.

The FBI paid an informant $132,000 to “wear a wire” during 327 days of conversations with Simpson between 2007 and 2009, in which Simpson stated that democracy was a threat to Islam and swore, “We going to fight you to the death.”

He made plans to travel to South Africa and then to Somalia to join the terrorist group al-Shabab, the Daily Beast reports.

In legal papers filed in the case, the FBI noted that Simpson said, “If you get shot, or you get killed, it’s (heaven) straight away. (Heaven) — that’s what we here for, so why not take that route?” the Daily Mail reported.

He said in Palestine, Iraq and Somalia, “They trying to bring democracy over there, man. They’re trying to make them live by man-made laws, not by Allah’s laws,” and added, “That’s why they get fought. You try to make us become slaves to man? No — we slave to Allah,” The Daily Mail reported.

Less than 15 minutes before the attack was launched at the Curtis Culwell Center, Simpson, identifying himself as “Shariah is Light,” posted on Twitter, “The bro with me and myself have given bay’ah (allegiance) to Amirul Mu’mineen. May Allah accept us as mujahideen,” The Guardian reported.

The Daily Beast noted that name is a common way of referring to Abu Bakr al-Baghdadi, the terrorist leader of the Islamic State (ISIS) and Simpson’s Twitter account carried a photo of Anwar al-Awlaki, a radical American-Yemeni al-Qaida cleric killed in a drone strike in 2009.

In 2010, the FBI took Simpson to court, stating that he intended to travel to join terrorists, but Judge Mary H. Murguia found there was insufficient proof to charge him. Instead, he was convicted of lying to the FBI and sentenced to three years’ probation, ABC News reports.

His lawyer at the time, Kristina Sitton, told ABC that Simpson was on the no-fly list.

However, in 2009, the FBI taped Simpson telling their informant, “We need to go to Somalia. We can make it to the battlefield. It’s time to roll,” court papers state.

“I thought [the case] was completely ridiculous, to tell you the truth,” Sitton told Vocativ, adding that she’s “not a bleeding heart — I’m a Republican.”

“They show up at his house and ask him about something that happened two years ago, and he says ‘no’ and then faces federal charges?” Sitton said that in the 1,500 hours of recordings with Deng, Simpson only mentioned Al-Shabaab, a Somali terrorist organization, twice.

Sitton  said “he never struck me as someone who would do this sort of thing.”

Sitton said Simpson “was always respectful to me and my staff—did everything he was supposed to do.” She added that he didn’t come from a Muslim family and didn’t convert to Islam until he was in high school. “He said he was running with a bad crowd in high school—smoking, drinking and stuff,” she said. “He said Islam got him away from that stuff.”