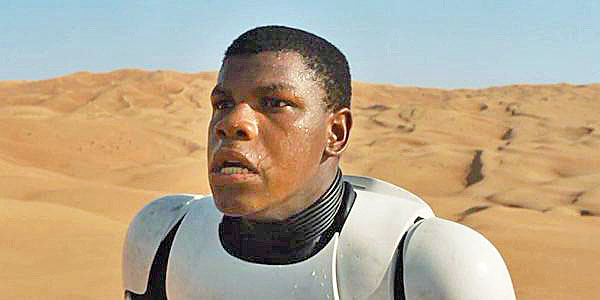 The hashtag #BoycottStarWarsVII exploded on Twitter Monday, just hours before the release of a new trailer during ESPN’s Monday Night Football game between the New York Giants and the Philadelphia Eagles. The reason: Abrams’ movie is allegedly a dream come true for race activists.

The Hollywood Reporter found a tweet by a user identified as Captain Confederacy saying, “[Social Justice Warriors] complain about White artists ‘misappropriating’ culture created by blacks but then celebrate a non-White Star Wars.”

The new “Star Wars” movie features a diverse cast, including star John Boyega. When fans questioned how the British actor, who is black, could be a stormtrooper in November 2014, the actor responded, “Get used to it,” Nov. 29, 2014, on Instagram.

“This is going to melt your brain, but you need to know … James Earl Jones voiced Vader and Lando is black,” popular YouTube film critic Jeremy Jahns responded Monday to the #BoycottStarWarsVII hashtag.

Fears that Abrams would infuse his own brand of political activism into projects are not unfounded. His last movie, “Star Trek: Into Darkness,” was described by one of the film’s star actors, Benedict Cumberbatch, as commentary on the presidency of George W. Bush.

“The whole theme of the film, a backbone without it being in your face and preachy, there’s a massive sort of comment about post-Bush/Cheney era foreign policy and the legacy from that,” Cumberbatch said at the movie’s premier, the New York Post reported May 22, 2013.

Director Abrams also just helped raise $750,000 for the Democratic Party at a fundraiser at his Pacific Palisades, California, home.