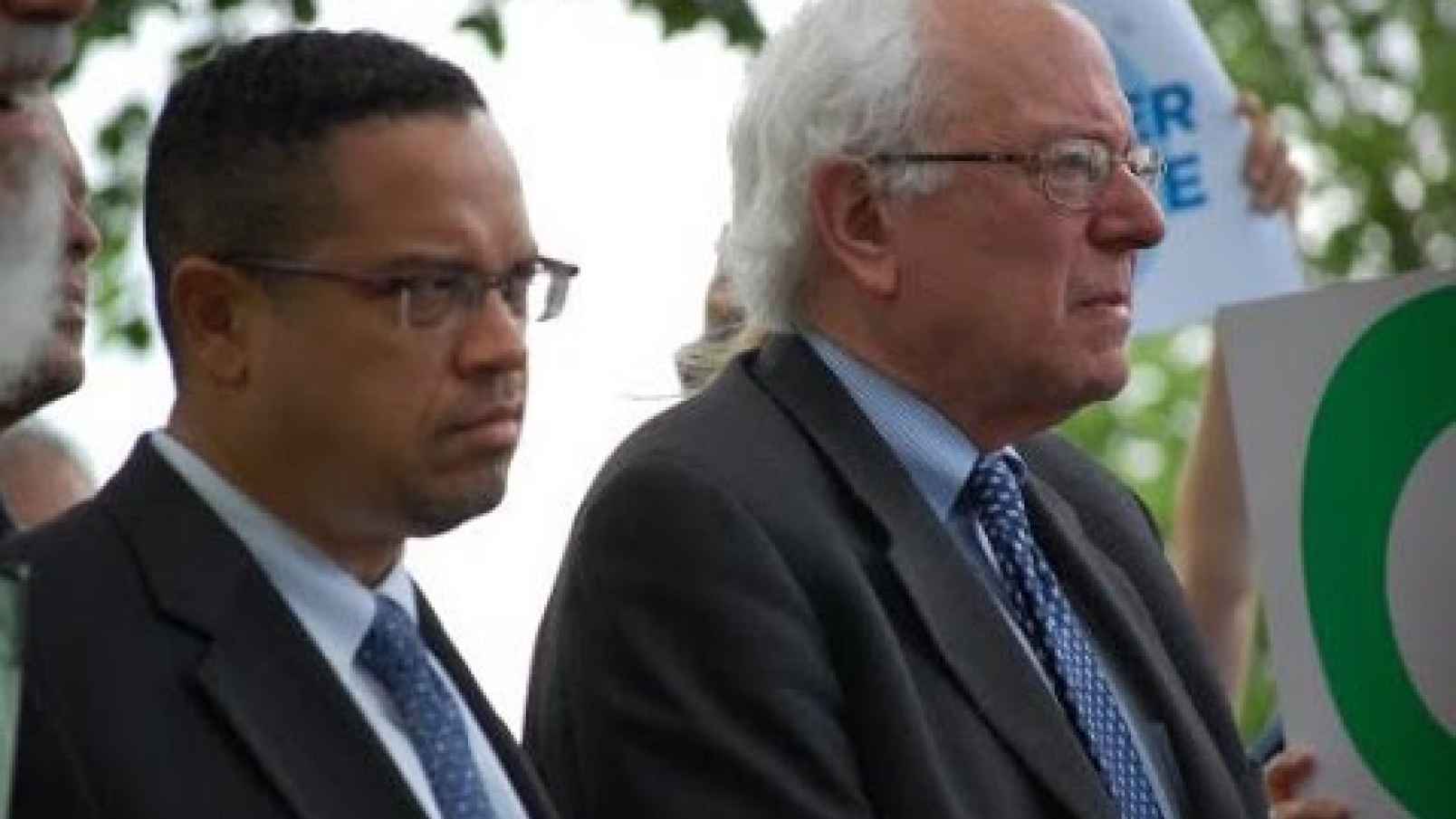 Since 2015, Britain has been one election away from having an antisemitic prime minister backed by antisemitic voters. If current trends in the Democratic Party continue, in the not-so-distant future, the United States might be in the same position.

Two years ago, Jeremy Corbyn was elected leader of Britain’s main opposition Labor Party. That officially put an end to Tony Blair’s alignment of the Labor Party with the political center in Britain, both in economic and in foreign affairs.

Corbyn is an antisemite. He refers to Hezbollah and Hamas – two terrorist groups that openly support the genocide of world Jewry and the annihilation of the Jewish state – as “our friends.” He has shared stages with Hamas terrorists and Holocaust- deniers. Since his ascension to leadership of the Labor Party, he has overseen the mainstreaming of antisemitic actions and rhetoric by his party members and supporters.

Shortly after Corbyn’s election, repeated, well-publicized acts of antisemitism by senior Labor Party members forced Corbyn to call for an investigation of the phenomenon. He appointed his ally Shami Chakrabarti to oversee the effort.

The Chakrabarti report – first presented at a Labor Party conference convened last June for that purpose – was not merely a whitewash. It effectively denied that it is possible to be concerned with antisemitism without being racially insensitive to other minority groups. In other words, concern for antisemitism is a form of racism in and of itself.

As for Corbyn himself, he couldn’t be clearer about his feelings. His remarks at his conference on antisemitism were antisemitic.

Corbyn insisted that it’s wrong “to assume that a Jewish friend is wealthy, part of some kind of financial or media conspiracy or takes a particular position on politics in general, or on Israel and on Palestine in particular.”

After all, not all Jews are bad, rich Jews who run the media and support Israel.

If that wasn’t enough, Corbyn then proceeded to allege that Israel is as evil as Islamic State. In his words, “Our Jewish friends are no more responsible for the actions of Israel and the Netanyahu government than our Muslim friends are for those various self-styled Islamic states and organizations.”

Since then, according to Jewish Labor Party members, Corbyn has refused to take any steps to diminish the increasingly strident antisemitic rhetoric and character of his party.

This then brings us to the American Democratic Party.

Over the past week, two incidents occurred that indicate that the party of Harry Truman and Bill Clinton is becoming increasingly comfortable with blaming the Jews.

Giraldi’s piece included all the classic antisemitic tropes: Jews control the media and culture; they control US foreign policy; and they compel non-Jewish dupes to fight wars for Israel, to which the treacherous Jews of America are loyal.

Giraldi recommended barring Jews from serving in government positions and participating in public debates related to the Middle East. And, he added, if an American Jewish Israel-backer refuses to recuse himself, the media should duly label him, “Jewish and an outspoken supporter of the State of Israel.”

Such a label, he contended, “would be kind of like a warning label on a bottle of rat poison.”

Plame, who ultimately issued a contrite, defensive apology for circulating Giraldi’s anti-Jewish screed, initially justified her decision to repost the article and say it was “thoughtful.”

She added, “Many neocon hawks ARE Jewish.”

And she should know.

Plame rose to fame in 2003, when she was at the center of a chain of events that led to the delegitimization of Jewish neo-conservatives in the Bush administration through a campaign of antisemitic innuendo and legal persecution.

In 2003, Plame’s husband, former diplomat Joe Wilson, published an article in The New York Times in which he falsely denied White House claims that Saddam Hussein had sought to purchase uranium yellow cake from Niger for the purpose advancing his nuclear program.

Apparently in retaliation for his false allegations, then-deputy secretary of state Richard Armitage leaked to syndicated columnist Robert Novak that Wilson’s wife Valerie was a CIA officer. Plame was a covert operative at the time, making Armitage’s leak a crime.

The Justice Department appointed special prosecutor Patrick Fitzgerald to oversee the investigation and prosecute the leak. Fitzgerald knew almost from the outset that Armitage was the source of the leak.

Yet he failed to prosecute him.

Instead, Fitzgerald went on a fishing expedition to root out then-vice president Richard Cheney’s Jewish chief of staff Scooter Libby. After a multiyear investigation, Libby, who did not leak Plame’s identity, was indicted and convicted on a specious count of perjury.

The effect of Libby’s indictment, prosecution and conviction was to place all his fellow Jews in the Bush national security team under constant and deeply antisemitic scrutiny. This defamation of Jewish American security experts in many ways paved the way for Barack Obama’s wholesale use of antisemitic undertones to defend his nuclear deal with Iran.

As Omri Ceren from the Israel Project recalled in a long series of Twitter posts after Plame circulated Giraldi’s article, Obama and his advisers repeatedly argued that “lobbyists” and Israel were seeking to convince lawmakers not to act in the US’s best interest. Instead they tried to manipulate senators into defending Israel and oppose Obama’s nuclear deal with Iran, to the detriment of America. These exhortations, made repeatedly by Obama and his surrogates were then expanded upon and made explicit by their political allies in places like the Ploughshares Foundation, which served as focal points of Obama’s media campaign on behalf of the Iran nuclear deal.

Until she resigned on Sunday, Plame served on the Ploughshares board of directors.

Plame’s wing of the Democratic Party is not explicitly antisemitic. Obama never said, “Jews are undermining US national security.” Instead, he attacked Israel and Prime Minister Binyamin Netanyahu. He attacked “lobbyists” and foreign interests.

Plame’s mistake last week was that, in tweeting a link to Giraldi’s article, she moved beyond Obama’s dog-whistle approach.

In a way, she can be excused for crossing the line, because the rising force in her party has little problem openly trucking in Jew-hatred.

That force, of course is the Bernie Sanders radical leftist wing of the party.

Around the same time that Plame was tweeting her way into ill-repute, Iran was showing off a medium- range ballistic missile capable of hitting Israel and Europe and Sanders was giving a foreign policy speech in Missouri.

Israel was a key focus for Sanders, who is now in charge of the Democratic Party’s outreach efforts.

Sanders said the US is “complicit” with Israel’s “occupation” of Judea and Samaria and Gaza. He said that he would consider cutting off US military aid to Israel. He argued the US should take a more evenhanded approach to Israel.

No similar statements have ever been made by any major presidential contender or political leader in either party.

And yet, they have raised no outcry among his fellow Democrats.

Sanders’s rise has unleashed forces in the party such as former Nation of Islam spokesman Rep.

Keith Ellison and BDS activist Linda Sarsour. Both have been outspoken in their antisemitism. Both routinely defame and delegitimize American Jews who support Israel. And both are all but unanimously embraced as leaders by their partisan colleagues.

In 2016, the party of Bill Clinton ceased to be the party of the working class. Hillary Clinton abandoned her husband’s Rust Belt base, referring to his voters as “deplorables.”

Absent a major restructuring of the party’s makeup, Plame’s forced resignation from Ploughshares may be remembered as the high-water mark in the new Democratic Party’s efforts to root out antisemitism from its ranks.