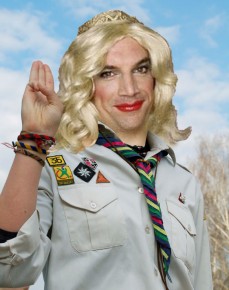 We live in a Bruce Jenner era, where a former athlete’s pronouncement that he identifies as a woman is celebrated on the prime-time stage. The normalizing of that which is not is in overdrive in the adult world, and increasingly, is spilling over to affect children like never before. Pushing adult pathologies such as transgenderism onto children does much damage, but questioning such actions is met with vitriol.

The topic of transgender children is still relatively new, but on the rise. Children identifying that way are deemed “activists”, and given much media attention. Transgenderism itself appears to be the shiny new identity issue to rally in support around, as a growing number of media figures, and even comic book characters, are coming/have come out as such. Because of the increase in this pop culture narrative, children are exposed to subject matter completely foreign to them, and thought processes a vast majority of them would not have known otherwise.

Just this week, children + transgenderism was a topic of conversation as knowledge of a Girl Scouts policy, which accepts into troops those boys who identify as girls, became widely known. The GSUSA’s desire is for inclusivity, but at what price to the biologically female, and biologically male, members of their troops? They’re sacrificing physical and emotional safety in order to appeal to a wider audience. For too long they’ve been a scout troop whose popularity was due to their annual cookie selling campaign. Now they’re seen in a “cooler” light, and praised by sites such as Jezebel for their progressivism.

Girl Scouts is proud to be the premiere leadership organization for girls in the country. Placement of transgender youth is handled on a case-by-case basis, with the welfare and best interests of the child and the members of the troop/group in question a top priority. That said, if the child is recognized by the family and school/community as a girl and lives culturally as a girl, then Girl Scouts is an organization that can serve her in a setting that is both emotionally and physically safe.

If these identities were such a healthy, common thing among children, why would the program basics place an emphasis on a case-by-case decision and focus on “welfare and best interests of the child”? Because, regardless of the push for inclusion, many thinking adults still realize that such a thing is very dangerous emotionally and physically, and the effects will be long-lasting on both the boys and the girls in scout troops. One might hope this would cause a national organization to pause, but apparently, being considered on the right side of history is a higher priority.

In a Girl Scout blog post this month, the following was shared:

Every girl’s sense of self, path to it, and how she is supported is unique.

The foundation of diversity that Juliette Gordon Low established runs throughout Girl Scouting to this day. Our mission to build “girls of courage, confidence, and character, who make the world a better place” extends to all members, and through our program, girls develop the necessary leadership skills to advance diversity and promote tolerance.

If the Girl Scout organization truly believes in the above, they should back away from the all-inclusiveness-for-the-sake-of-popularity stand, and focus on aiding the development of healthy minds and attitudes of the young girls who join them. If GSUSA truly sees everyone as unique, they won’t attempt to blur the gender lines just to create a false environment of tolerance. Ultimately, if parents and other authorities are concerned with raising healthy kids, they won’t feed the deep-rooted psychological issues which might cause a child to announce as transgender, by seeking acceptance in an afternoon of selling cookies.