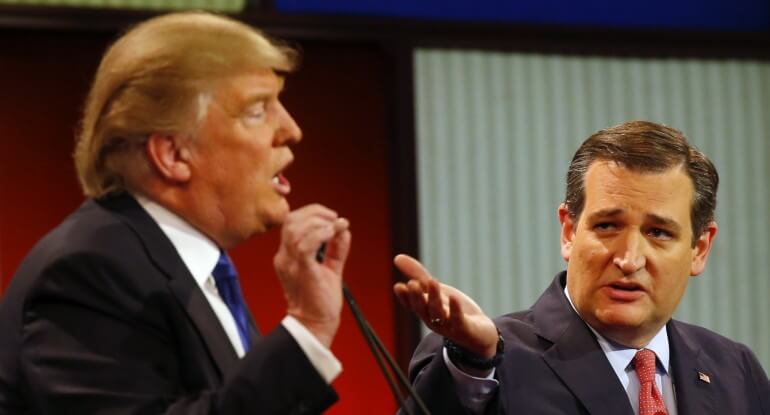 This week, Donald Trump praised a possible challenger to Ted Cruz in the 2018 Texas Senate primary, even as he vindicated one of Cruz’s strongest arguments. Infamously, Trump weakened his stance on immigration — his signature issue — drawing the ire of none other than Ann Coulter, who just released a book titled “In Trump We Trust.

Shortly after Cruz declined to endorse Trump at the Republican National Convention last month, the Republican nominee talked about establishing a super PAC to spend money against the Texas senator (along with Ohio Governor John Kasich, who boycotted the RNC). According to a recent poll by the Democratic group Public Policy Polling, the only challenger who could defeat Cruz in the 2018 Senate primary is former Governor Rick Perry.

At a fundraiser in Austin on Tuesday, Trump lavished praise on Perry. “I’ve been hearing a lot about that [Perry running against Cruz] and I don’t know if he wants to do it, but boy, will he do well,” the nominee declared. “People love him in Texas, and he was one great governor.”

Turning to the former governor, who was in the room at the time, Trump said, “I don’t know what he’s going to do but you are one popular guy all over, but in Texas in particular.”

Yet the nominee did not just implicitly attack Cruz this week, he also vindicated the Texas senator’s warnings about him during the presidential primary. During their heated struggle for the nomination, the Texas senator argued that Trump had pulled the wool over his supporters’ eyes, and still believed in lax immigration promises. Cruz said Trump’s true positions would come out in the general election. Now, that warning appears to have come true, much to the chagrin of Ann Coulter.

“It vindicates what Ted Cruz warned would happen during the course of the campaign,” Chris Wilson, director of research, analytics, and digital strategy on Cruz’s campaign and a top Cruz advisor, told Politico. Wilson argued that the Texas senator’s speech at the RNC, far from being Cruz’s political suicide, would be remembered favorably.

“Everything Trump promises comes with an expiration date,” Amanda Carpenter, Cruz’s former Senate communications director, added. “We knew it during the primary, and now it is apparent he has duped his most loyal supporters on the issue they care about most, immigration. Don’t say we didn’t warn them.”

But the PPP poll didn’t just say Rick Perry could defeat Ted Cruz in the 2018 primary, it also found that Cruz’s popularity has taken a nosedive. Nevertheless, there are many reasons to take this news with a grain of salt.

Following Cruz’s declaration that Republicans should “vote their conscience” at the RNC — which most seem to have automatically interpreted as meaning “vote against Trump,” for some odd reason — many have called his speech an act of political suicide. (It is notable, when discussing these matters, that Trump went after Cruz’s family personally, even suggesting that Cruz’s father was involved in the JFK assassination.) Indeed, the PPP poll seems to indicate that this Texas senator’s lone star is waning. But I wouldn’t be so quick to pronounce him dead.

Only one challenger stands a chance against Cruz, and that person is none other than the longest serving governor in Texas’ history. Rick Perry, who served as governor for 16 years, and whose approval rating did not take a hit despite a formal indictment in 2014, would certainly be stiff competition for any office in the Lone Star State.

Other potential challengers, Lieutenant Governor Dan Patrick and Representative Michael McCaul, come nowhere near Cruz, losing to him by 22 points and 32 points, respectively. Fifty percent of Texas Republicans say they want Cruz to be the candidate for Senate again in 2018, while only 43 percent want to replace him.

The poll also indicated that the senator would wipe the floor with potential Democratic candidates, U.S. Housing Secretary Julián Castro and former gubernatorial candidate Wendy Davis, who both lose by 12 points in a hypothetical match-up.

The attention-grabbing news in this poll (released by a left-leaning pollster let’s not forget) is Cruz’s rising unpopularity. Only 39 percent of voters approve of the job he is doing as senator, while 48 percent disapprove. This contrasts with presidential preference, where 52 percent of Texans say they prefer Trump as their nominee, while only 38 percent would go with Cruz.

In context, however, it is the 38 percent who still prefer Cruz as the nominee which is truly surprising, not the pro-Trump numbers. Yes, Cruz won the Texas Republican primary with 43.8 percent of the vote, but the primaries are over. Trump is not only the nominee — he has been coronated by the Republican National Convention. Even so, a bare majority of Texans support him as their nominee, while 38 percent still prefer Ted Cruz! That’s only 5 points less than in the primary.

Also, Cruz’s current decline in popularity is not surprising, either. He lost the primary, and did not endorse Trump. Furthermore, the Republican nominee has decidedly continued his attacks against him, going so far as to support a primary challenge in 2018. So long as Trump stands atop the GOP, many Republicans will feel it their duty to cast aspersions on his most vocal challenger. Then again, this shift in Trump’s immigration strategy might shift the winds in Cruz’s favor.

Furthermore, long presidential campaigns distract from the work that senators have been doing on Capitol Hill. Cruz was more active in the Senate than Marco Rubio during the campaign, but even so, his campaign efforts were in the public eye, while his Senate business very much was not. Shortly after the end of the campaign, many Texas voters undoubtedly saw Cruz as a campaigner more than as a senator, and this partially accounts for the low job approval rating.

This is not to say that Cruz does not have his own problems. The Texas senator often speaks like a Southern Baptist preacher and his mannerisms have turned off many people. Many Republicans distrust him because he has been so vocal against members of his own party, and while those of us who consider him a stalwart warrior for conservatism may defend his prickly demeanor, we do not delude ourselves into thinking the Republican Party could easily unite behind him.

Even so, Cruz is far from dead. If Trump loses in November, Cruz’s stock in the GOPwill likely go up. The very fact that Trump considered it worthwhile to praise Perry as a possible 2018 challenger suggests the Republican nominee still thinks Cruz worth his attention. After the Trump’s recent shift on immigration, I emphatically agree.