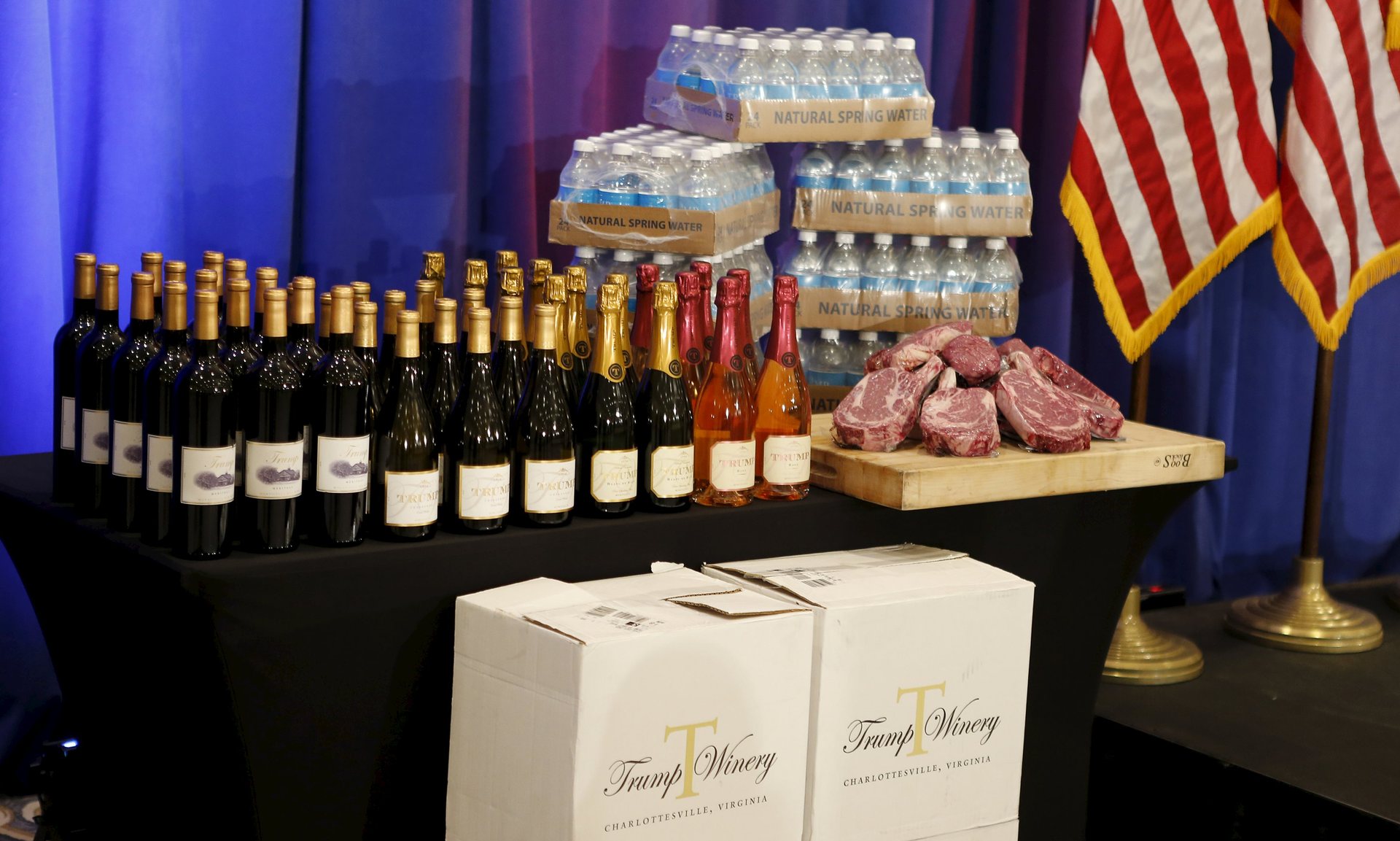 The Republican frontrunner rejected Mitt Romney’s attacks as he held up a magazine that wasn’t his and showed off steaks of unclear origin.

Presidential candidates are often asked to defend their records. But that does not usually result in a 20-minute infomercial promoting the candidate’s own branded products.

After decisive wins in Mississippi and Michigan, Donald Trump took the stage at a news conference at his golf course in Jupiter, Florida, on Tuesday evening. On either side of the podium, Trump-branded items were on display: rows of Trump red, white and rosé wine bottles, cases of water bottles, and thick slabs of steak.

“I don’t think I’ve ever had so many horrible, horrible things said about me in one week,” Trump said. Earlier in the week, Mitt Romney, the 2012 Republican presidential nominee, delivered a scathing indictment of Trump, calling him “a phony, a fraud” and highlighting what he painted as the billionaire’s many failed business ventures.

“Whatever happened to Trump Airlines? How about Trump University? And then there’s Trump Magazine and Trump Vodka and Trump Steaks, and Trump Mortgage,” Romney said. “A business genius he is not.”

On Tuesday night, Trump sought to set the record straight.

“I brought some things up,” Trump said, gesturing to the products, “because, he said, ‘Water company is gone.’ I said, ‘It is?’ I didn’t know that. I have very successful companies. I’m going to do this in two seconds.”

“There’s the water,” he said, pointing to cases of Trump-branded natural spring water. Romney did not actually refer to Trump Ice, the discontinued bottled water brand the businessman once sold in national grocery stores.

“Trump steaks, where are the steaks? Do we have the steaks?” he said. “We have Trump steaks. And by the way, you want to take one, we charge you about, what, 50 bucks a steak? Nah, I won’t.”

Trump Steaks, which were sold exclusively by the Sharper Image, a consumer electronics store, and billed as the “world’s greatest”, are no longer available for purchase. Some reporters have questioned whether the steaks Trump brought on stage were in fact from a company called Bush Brothers, the butcher that supplies the club, according to the Associated Press.

Trump continued. “We have Trump Magazine,” he said, picking up a magazine. “I said, ‘It is?’ I thought I read one two days ago.”

He tossed the copy to someone in the audience. But it was not a copy of his eponymous magazine, which was shut down in 2009 after just two years in print. It was instead the Jewel of Palm Beach, an annually produced pamphlet distributed at his golf clubs.

He also defended Trump University, the online education company which is the subject of at least three pending lawsuits.

“So I wanted to put that to rest,” Trump said. “You have the water, you have the steaks, you have the airline that I sold. I mean, what’s wrong with selling? Every once in a while you can sell something. You have the wines and all of that.

“And Trump University, we’re going to start it up as soon as I win the lawsuit.”