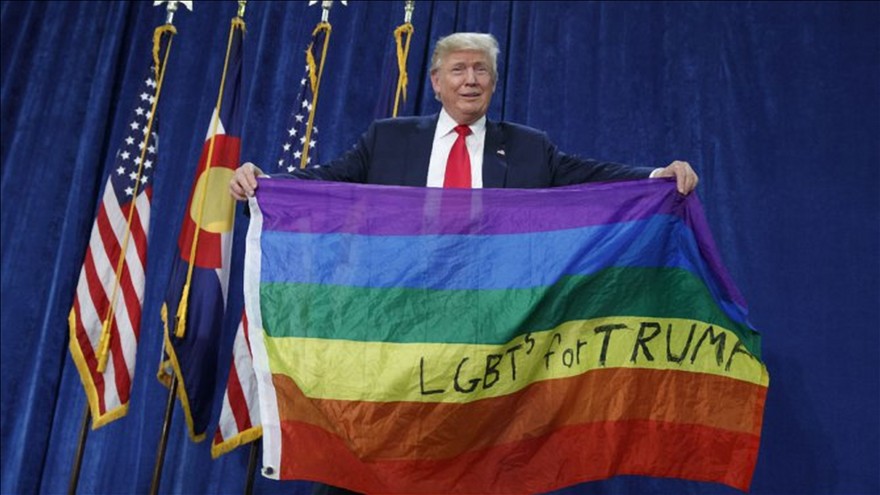 Trump has made homosexual perversion even more acceptable than Obama did – now it’s embraced in the Republican party.

On gay-related issues, the news media couldn’t have picked a “Republican” president more in sync with their views than Donald Trump.

But the country isn’t dealing with a rational press right now.

The GOP was stuck on gay stuff until a New Yorker came along and cleared the field for them by saying he was not only “fine” with same-sex marriage but also by actively embracing gays in a bigger way than President Obama did.

Meanwhile, Trump, having grown up in the most diverse city in the world, is an outcast among the gay-supporting national media.

In a cover piece for Newsweek in 2012, Andrew Sullivan dubbed Obama “the first gay president.”

He also choked up on national television, calling Obama a “father figure” because he said he supported gay marriage.

Obama’s main claim to gay celebrity was changing his mind on marriage. He opposed same-sex marriage before he was first elected in 2008 and then he came to support it before his second term. (By the way, the Supreme Court handled the dirty work, Obama simply nodded in approval.)

Trump was not the first to support gay marriage, but he did a lot. After the mass terror shooting on the Orlando gay nightclub in June, he did what no other Republican would have ever done. He called it an attack on “the members of Orlando’s LGBTQ community” and said the tragedy was done “in order to execute gay and lesbian citizens because of their sexual orientation.”

In July, Peter Thiel, founder of PayPal and a big Trump supporter, was the first person ever to declare on stage at the Republican National Convention that he’s “proud to be gay.”

And at the convention, Trump, accepting the party’s nomination, said, “As your president, I will do everything in my power to protect our LGBTQ citizens from the violence and oppression of the hateful foreign [Islamic extremism] ideology.”

Following a standing ovation and roaring applause, Trump broke from prepared remarks that were handed out to media in advance.

“And I have to say,” he said, “as a Republican, it is so nice to hear you cheering for what I just said. Thank you.”

The country couldn’t have had a more pro-gay president if it had elected Elton John.

But even in October, when Trump held up a rainbow flag at a campaign rally, the Huffington Post remained bitter.

The website’s “queer voices” editor called the display “bizarre” and “calculated.” (This is in contrast to Obama’s change of heart on same-sex marriage in the heat of his 2012 re-election campaign.)

The move was deemed bizarre and calculated because Trump apparently held the flag upside down, the author said.

It’s supposed to matter that Trump between the campaign and his election changed his tune on same-sex marriage. But that’s one year’s difference, as opposed to the four years it took Obama to voice his own support for it.

Only once in its coverage did the New York Times mention the rally where Trump held up the gay flag. The Washington Post didn’t cover the incident at all and neither did USA Today.

Every other Republican is pressed on whether they’d personally bake a cake for a gay wedding. But Trump is almost entirely ignored when he shows support for gays because he unfurled a rainbow flag the wrong way.

After he was sworn in on Friday, a flurry of reports noted that a page celebrating LGBT people disappeared from the White House website.

“So, while it’s unclear whether the White House’s LGBT rights page will ultimately be replaced by a new feed with the mark of this new presidency, many Americans view the disappearance of the former page as an unsettling sign of things to come,” read a report by CBS News.

It turns out that the entire WhiteHouse.gov website was redone after Obama left office. Anyone going there after Trump was sworn in was greeted by what is essentially a new web site, displaying Trump’s image instead of Obama’s.

If only the landing page showed Trump holding up a rainbow flag. But even that wouldn’t have mattered.