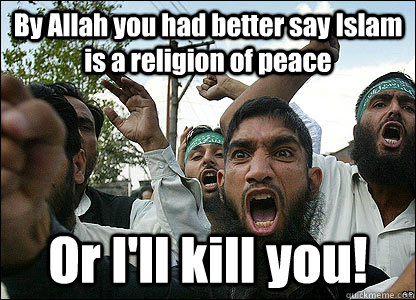 I thought all terrorism was the result of global warming.

Islamophobia: The irrational and cowardly fear that liberals feel when refusing to talk about the violence and problems associated with Islam or Muslim terrorists. Usually fueled by a fear that if anyone blocks terrorist countries, insults, or draws their profit Mohammed, or if anyone claims that Islam is not a religion of peace, Muslims will kill them.

This statement fits into the UN’s ongoing efforts to compel states that protect the freedom of speech to adopt “hate speech” provisions that would effectively involve their adopting Sharia blasphemy provisions.

The idea is that anyone (especially President Trump) who says there is the slightest problem with Islam is only aiding Islamic State propaganda that the West is waging war upon Islam. This is predicated on the further assumption that Islam is a religion of peace, and that the motivation for jihad terrorism couldn’t possibly come from within it. So the poor dears must only become terrorists when we say bad things about their religion, so if we just stop doing that, all will be well.

The only problem with this scenario is that the Qur’an’s exhortations to the conquest and subjugation of unbelievers are not predicated on what those unbelievers say or don’t say. The jihad will continue, and if we shut up about it, many people will remain ignorant and complacent about it as it advances.

“Islamophobia” in parts of the world is fueling terrorism, the head of the United Nations said on a visit to Saudi Arabia Sunday, as anti-immigrant sentiment rises in some countries.

“This is the best support that Daesh can have to make its own propaganda,” Guterres said, using an Arabic acronym for the Islamic State group of Sunni extremists in Syria and Iraq.

The terrorist group has also claimed deadly attacks in Saudi Arabia and in Europe.