All members of the Virginian State Bar received this email early this morning:

Certain members of the Virginia State Bar and other individuals have expressed objections to the VSB’s plan to take the Midyear Legal Seminar trip in November to Jerusalem. It was stated that there are some unacceptable discriminatory policies and practices pertaining to border security that affect travelers to the nation. Upon review of U.S. State Department advisories and other research, and after consultation with our leaders, it has been determined that there is enough legitimate concern to warrant cancellation of the Israel trip and exploration of alternative locations.

Undoubtedly, this news will disappoint some VSB members. But we are a state agency that strives for maximum inclusion and equality, and that explains this action. Fortunately, we still anticipate being able to find a suitable location for the November seminar trip, and we will send out further news very soon.

Finally, we are pleased that our members and citizens feel able to express concerns and look to us to protect rights. In the end, we are all part of the same team, and the VSB will continue to stay focused on advancing its primary objectives—public protection, access to justice, and improvement of the profession.

As always, I appreciate having the honor of serving as your president.

The Volokh Conspiracy blog in the Washington Post notes:

(1) The American Bar Association has recently held meetings in Israel, for example here and here [update: along with hundreds of international conferences that are held in Israel every year, including, for example, a conference on Arabic literature with Muslim attendees from abroad.]  Virginia has a state agency called the Virginia Israel Advisory Board “that proactively serves as the bridge and facilitator between Israeli companies and the Commonwealth of Virginia.” The idea that either the state bar as an attorney organization or as a state agency has some obligation to avoid Israel is nonsense. Surely Martingayle and colleagues can’t be so naive and out-of-touch to think that the concerns raised are not part of the broader divestment, sanctions, and boycott movement meant to delegitimize Israel.
(2) If the Virginia State Bar is in effect boycotting Israel, I, and I suspect many others, will henceforth be boycotting the State Bar, in my case beyond what is necessary to assist my students, which is my professional obligation. I would hope that no Virginia attorneys who are supporters of Israel will attend whatever alternative venue the State Bar settles on.
(3) As near as I can tell, the only public discussion of all this before Martingayle’s letter was a petition circulated three days ago by anonymous“Concerned Members of the Virginia State Bar” that, as of this writing, has received a grand total of thirty-four signatures. It’s hard to imagine that the Martingayle and colleagues canceled a planned event that already had a hotel booked, a CLE program, and even optional tours set up based on those objections. Who are the “other individuals” mentioned by Martingayle who objected?
(4) Relatedly, as a state agency, the Virginia State Bar is subject to FOIA. If no enterprising journalist is already FOIAing the relevant correspondence that led to this decision, I’m sure somebody else will be.

This clearly was a well-planned, under-the-radar move, and it is odd that the email was circulated on a Friday night long after the seminar was planned.The VA State Bar already had a hotel reserved for the event, which was well-advertised, and had registration and travel procedures in place. 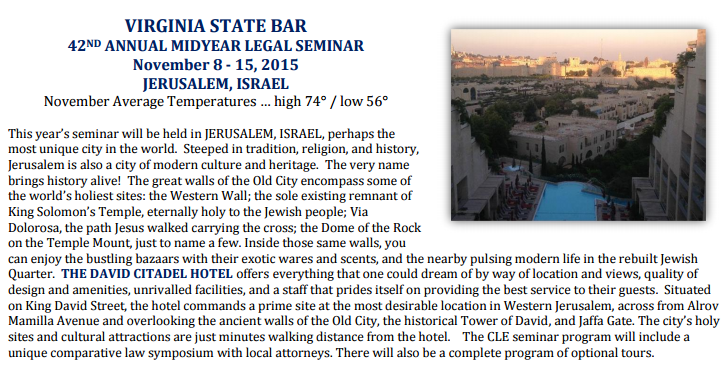 I have a feeling that many are going to quit the Virginia Bar Association after this debacle. (UPDATE: See comments; they can’t without losing their ability to practice in VA.) But perhaps this publicity is what they want. As lawyer David Schraub comments on his blog, maybe Martingayle had no idea what he was supporting the antisemitic BDS movement, but just maybe – he did:

The second possibility, though, is that Mr. Martingayle is going in with eyes wide open. He knows the backlash that will emerge, and he fully expects it, and he fully expects it to win. Again, given what I know about Virginia and Virginia state politics, I do not believe that Mr. Martingayle has the political backing to take a stance like this and survive the fallout. But provoking an overreaction is a form of strategy too. A too-vitriolic response by the rest of the Virginia government — a direct encroachment on the Bar’s autonomy, for instance — could have disastrous long-term consequences even if it ousts Martingayle in the short-term. And more generally, Mr. Martingayle benefits from the truth of any political controversy that has Jews at the center: If he wins, he’s the man who boldly stood up to Jewish power. If he loses, he’s the martyr who sacrificed himself before the unstoppable juggernaut of Jewish power. We still live in a polity where the exercise of Jewish political agency is presumptively illegitimate insofar as it clashes with gentile preferences. One reason that Jews Lose is that any situation where we don’t lose is coded as a system failure. Jews losing means the system is working properly, Jews winning means we’ve successfully subverted the system. It creates a severe double-bind, and means that someone who comes in and is willing to play the martyr to demonstrate the malevolence of the big bad Jewish lobby will have little difficulty succeeding.

Finally, as Volokh Conspiracy notes, literally hundreds of thousands of Arabs have visited Israel in recent years without incident. Israel’s profiling isn’t against Arabs but against potential troublemakers – plenty of which are not semitic at all.