The Obama administration began last week with the assertion that the root cause for ISIS’ barbaric behavior was “its lack of opportunity for jobs.” President Obama ended the week claiming that ISIS’ allure for young people is that they “feel entirely trapped in impoverished communities … where there are no educational opportunities.” Nonsense. In fact, it is and has been just the opposite.

Olivier Roy, a researcher at the Centre National de la Recherche Scientifique in Paris, notes that even back in the 1970s and ’80s in “the Muslim Brotherhood in Egypt, the Refah in Turkey, the Islamic revolution in Iran – the actors [were] young, urban, educated people and people educated in the modern, Western system of education.” This is still true today. Thousands of youth are now joining ISIS by leaving schools in wealthy prosperous Western nations and choosing to go live instead in an impoverished desert region.

Why? According to an expert at Duke University, these young people (such the recent three British girls) “are responding to quite a deliberate call from the Islamic State to have women come and participate in a form of state-building and to make a new country in which they can practice their religion.” “Practice their religion.” It is religious beliefs, not economics or education, that is the common thread in ISIS’ growth.

If the Obama administration really wants to identify the root causes of ISIS’ outrageous behavior, it should start by reading documents already in its possession – such as the first reports filed on this subject from back in the 1780s.

At that time, America (along with other Western nations) was a victim of Muslim terrorist attacks being launched out of northern Africa and the Middle East. Seeking to solve the problem, in 1784 Congress dispatched John Adams, Benjamin Franklin and Thomas Jefferson to go meet with the Islamicists. Adams and Jefferson candidly asked the Muslim ambassador the motivation behind the unprovoked attacks and then reported his answer to the State Department: 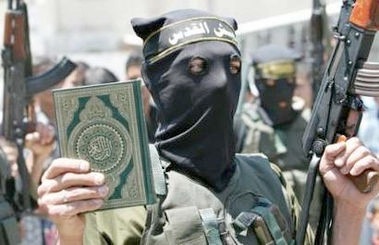 “The Ambassador answered us that it was founded on the laws of their Prophet [Muhammad] – that it was written in their Quran that all nations who should not have acknowledged their authority were sinners; that it was their right and duty to make war upon them wherever they could be found and to make slaves of all they could take as prisoners; and that every Musselman [Muslim] who should be slain in battle was sure to go to Paradise.”

“Taught by revelation that war with the Christians will guarantee the salvation of their souls, … their [the Muslims’] inducements to desperate fighting are very powerful.”

Based on what they learned, Jefferson identified the obvious solution:

“If we wish our commerce to be free and uninsulted [i.e., unattacked], we must let these nations see that we have an energy [willingness to use force], which at present they disbelieve. The low opinion they entertain of our powers cannot fail to involve us soon in a … war.”

George Washington agreed, affirming that what was needed was decisive military action that would “reform those enemies to mankind – or crush them into non-existence.”

Courageous leaders in the Middle East today follow George Washington’s advice much better than do our own leaders. Only two days after a Jordanian pilot was burned alive, Jordan’s King Abdullah personally led the retaliatory attacks against ISIS, and only one day after 21 Egyptian Coptic Christians were beheaded by ISIS, the Egyptian military pounded the terrorist group in Libya. While the Obama administration condemned that action, you can rest assured that ISIS will now think twice before executing more Jordanians or Egyptians. They would much rather select their victims from nations that talk and negotiate.

Although State Department spokeswoman Marie Harf claimed that “we cannot win this war by killing them,” over the past several centuries this has been the means by which Western nations have successfully “reformed those enemies to mankind.” (The only other historical solution that has demonstrated any success is that of religious conversion, either from without or within – that is, either conversion to a different religion, or the remaking of the religion itself from within, such as with the reformation that long ago occurred in both Judaism and Christianity that moved its followers in a more socially-productive direction.)

Despite the Obama administration’s steadfast denial, the root of Islamic terrorist attacks is not economic disadvantage; it is religious beliefs. As Graeme Wood noted in his excellent report on ISIS, to ignore this obvious fact “reflects another kind of Western bias: that if religious ideology doesn’t matter much in Washington or Berlin, surely it must be equally irrelevant in Raqqa or Mosul. When a masked executioner says Allahu akbar while beheading an apostate, sometimes he’s doing so for religious reasons.” So rather than following the Obama administration’s pattern of psychoanalyzing Muslim terrorists who tell us why they do what they do, we should instead just believe them.

After all, even modern Islamic leaders, scholars and Muslim apologists affirm that the current “slavery, crucifixion, and beheadings are not something that freakish [jihadists] are cherry-picking from the medieval tradition” but rather that the Islamic state “has an obligation to terrorize its enemies … with beheadings and crucifixions and enslavement of women and children, because doing so hastens victory and avoids prolonged conflict.”

But the rabid secularism of the Obama administration causes it to reject religious explanations, regardless of the faith with which they are associated. Just as it dismissed out of hand the religious motivations on the part of Christians at Hobby Lobby, it similarly discounts the religious motivations of the Islamicists who comprise the Muslim Brotherhood, ISIS, and other such groups. (By the way, it should be particularly disturbing to every American that the Obama administration deems itself qualified to be the judge of what is or is not a genuine religious belief, whether it is the Catholics on abortion or ISIS on barbarism.)

It is ludicrous for this administration – or any other – to try to talk Islamicists out of their religious beliefs by offering them economic assistance or jobs. Only a non-devout person can be bought off. Would Billy Graham change his beliefs and behavior if he were offered sufficient economic incentives? Would the Dali Lama? The chief rabbi of Jerusalem? The pope? Certainly not. Neither will the dedicated Islamicists of ISIS. America’s foreign-policy makers need to understand this millennia-old reality, which will never be the case with the unabashed secularists currently at the helm of this administration.