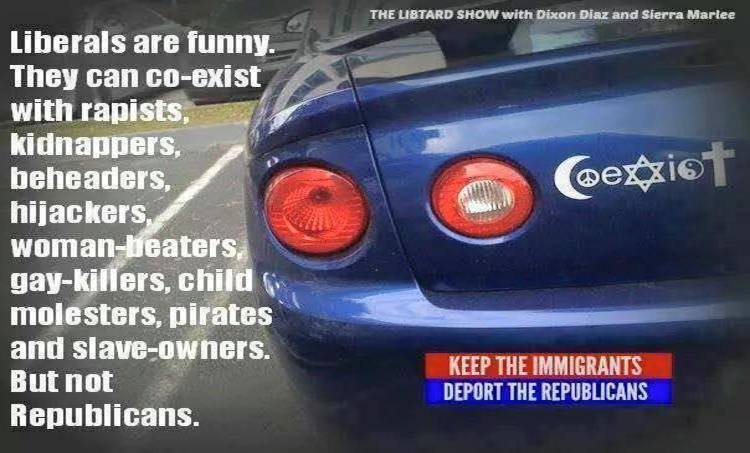 So, clearly, liberals can coexist with everyone else except Republicans — because we’re obviously on the same level as rapists and murderers and, of course, the terrorist Iran leaders chanting “Death to America!”

Obama again refused to use the words “radical Islamists,” instead blaming the chants on a few Iranian “hardliners”:

“I realize that resorting to force may be tempting in the face of the rhetoric and behavior that emanates from parts of Iran. It is offensive. It is incendiary. We do take it seriously. But superpowers should not act impulsively in response to talks… Just because Iranian hardliners chant ‘Death to America” does not mean that that’s what all Iranians believe.”

Unfortunately, some of those “hardliners” calling for “Death to America!” include Iran’s supreme leader and the Iranian Parliament.

Obama then accused Republicans of being in league with the Iranian hardliners:

He doesn’t realize how entirely offensive that statement is against America, which is the country he’s supposed to love, being the “leader” of it and all.

The idiots in America voted in a man who compares his own people to terrorists because they don’t agree with him.

Obama hates it when his omnipotence is challenged, so he chooses to insult Americans and be a traitor to his own country.

This man wants you to believe that the enemy is inside our own walls so he can cause further division instead of unification.

No piece of paper is going to stop Iran from doing what they want, and Obama is not going to do anything to upset his Muslim brothers.

What do you think of this?