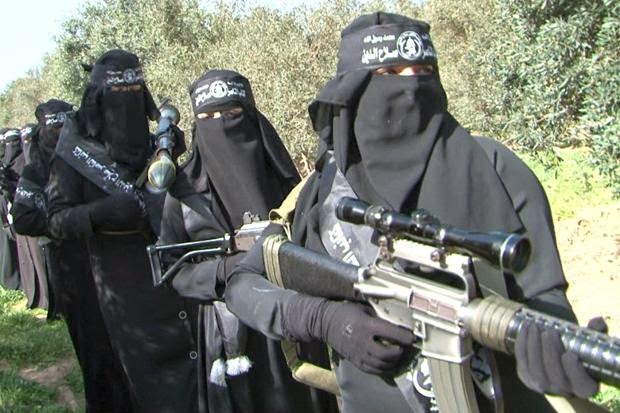 How many of the women “civilians” killed were actually terrorists?

From The Times (UK) (the left calls them “fighters” instead of terrorists):

Hadifa sold all her engagement jewellery to buy the battered AK-47 that she lovingly cradled as she talked about preparing for “part two” of the war with Israel. Her fiancé didn’t mind the extravagant purchase, she said, giggling: he is her battalion commander.

A 26-year-old student from Gaza City, Hadifa wears the black niqab and monochrome bandana of her battalion, the Nasser Salahuddin Brigades. She is part of a growing movement of female fighters in the conflict-ridden territory.

The 51-day war with Israel last year, which claimed the lives of 2,100 Palestinians, 66 Israeli soldiers and seven civilians in Israel, was not yet over, she said, and fighting would break out again “any day” now that the Israeli elections were over.

[So-called] “Palestinian” women fighters have been active since the second intifada in 2000, but their numbers have swelled since the most recent Israeli offensive. All of Gaza’s fighting groups have female units, but the most efficient is the Nasser Salahuddin Brigades unit.

“There are more women than ever — we are now almost equal to the number of men. After this war we saw a huge increase of women signing up for the next fight,” said Om Adam, 40, a leathery-faced veteran fighter, and wife of a senior Salahuddin commander.

She said there were several hundred female fighters in Gaza, but no one knew the exact number because each unit worked in a secretive, 25-strong, cell-like structure. She agreed to meet The Times only after nightfall.

The women know only their comrades in their unit. Each cell is led by a female commander, who is assigned a male superior. The Salahuddin Brigade is thought to have at least 80 female combatants and hundreds of others who work in support roles.

Om Adam said that the women fighters had become increasingly important because they could move more freely, passing on weapons, food and information to the men, who might spend weeks almost entirely underground in Gaza’s intricate network of tunnels. “We act as the eyes and ears on the ground for the fighters, checking the streets before they move.”

Some were engaged in direct combat, said Om Khadija, 24, a female fighter who manned an RPG and several rocket launchers during the two months of fighting last summer. All the women recruits were trained to use and fix weapons, including sniper rifles, AK-47s, RPGs and M16s.

Om Adam signed up for a frontline role after her son lost both his legs and half of one arm when their home was bombed during the 2008-2009 war with Israel. She said that a shrapnel wound was still etched like a shark bite into his skull from the blast, which killed several other members of the family.

“Think of it as revenge. People have lost everything and live in appalling conditions here in Gaza. Either you die pointlessly and slowly, or quickly with purpose,” she said.

The humanitarian crisis in Gaza has forced many desperate youths who have nothing else to live for to join groups fighting Israel, according to Pernille Ironside, Unicef’s Gaza director.

…[P]overty is widespread — leaving people with little else to do but fight, Om Khadija said.

Sure. It’s not like they can learn web design or languages or desktop publishing or any other freelance  job that could be done with only an Internet connection. Nope, they have no other choice.

Her battalion trains three days a week, in a flexible schedule which works around the women’s domestic commitments. Training videos posted on YouTube show them wielding RPGs, all wearing voluminous black burkas and niqabs — but in battle and in the tunnels, some of which are reserved for women, they wear tunics and lose trousers for ease of movement.

“We have a rigorous fitness programme, like the guys, which involves everything from climbing to running through fire. We also study war strategies, English and technology,” said the young mother. “It’s only a matter of time until the fighting starts again. We’re training and re-arming. We’re fully prepared.”

Even if they weren’t active combatants, it seems likely that some of the women killed in Gaza who are regarded as civilian were actually part of the terror infrastructure.

Here’s video of the ladies. I like how the standard terrorist ski masks aren’t modest enough for them.