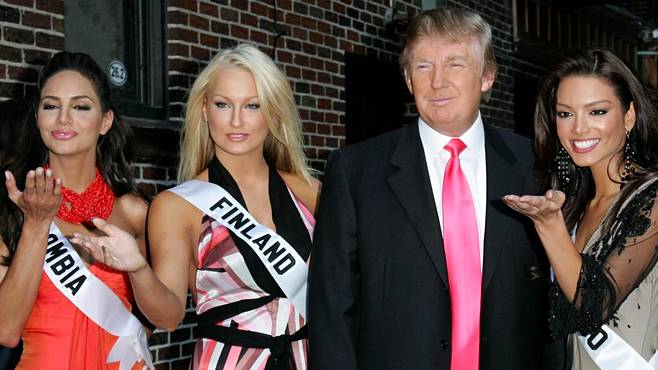 This is getting ridiculous! Beyond, actually.

She’s the eleventh that has credibility, since the sex industry worker from last week, Jessica Drake is not credible and should be laughed at and ridiculed for her mercenary idiocy.

Miss Laaksonen’s tale of Trump lechery appeared in Thursday’s edition of The Telegraph.

Laaksonen said the incident occurred in New York City before she appeared on CBS’s “The Late Show with David Letterman” in July 2006.

Trump was appearing on the program, she said, with her and three other Miss Finland contestants.

“Before the show we were photographed outside the building,” she said of her encounter with Trump.

“Trump stood right next to me and suddenly he squeezed my butt. He really grabbed my butt. I don’t think anybody saw it but I flinched and thought: ‘What is happening?’”

I always have to wonder about these women. Did none of them have brothers that taught them how to ball up their fists and just start punching until either something breaks or somebody screams “STOP”?

Regardless, this is a pattern of disturbing stories. They can’t all be false.

Laaksonen’s story actually gets even creepier.

“Somebody told me that [Donald] Trump liked me because I looked like Melania [Trump] when she was younger,” she said, referencing Donald Trump’s wife, whom he married in 2005. “It left me disgusted.”

How sad for Melania Trump (if you believe that a beautiful woman of 45-years old stays married to a lascivious 70-year old billionaire out of true love, and not matters of financial security).

So why am I writing about it?

Because I want a record, for every Branch Trumpidian cult member, on November 9, 2016, as they rage and roar about what happened. I want to be able to show them, one-by-one and account after account of every ugly detail of who Trump is, as a candidate and a person.