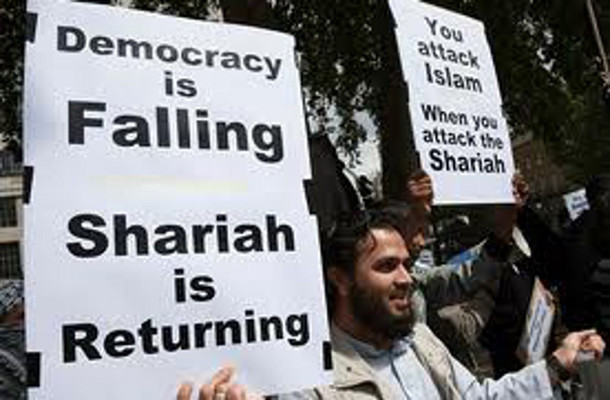 And this is only the percentage of Muslims in America that actually admit wanting Sharia Law forced on all Americans.

As the global jihad grows, Obama is importing hundreds of thousands from jihad nations. If you are hanging your hopes on the “moderates,” think again. According to a recent poll, 58% of US Muslims reject First Amendment criticism of Islam as a right. 46% want blasphemy punished, 12% want them killed.

Muslims are the only immigrant group that comes to Western countries with a ready-made model of society and government (sharia) which they believe to be superior to what we have here, and they work to institute it.

“I just don’t know any Muslim-Americans — and I know plenty — who feel that way, even if they are observant Muslims,” he scowled.

Tapper doesn’t get out much. If he did, chances are he’d run into some of the 51% of Muslims living in the U.S. who just this June told Polling Co. they preferred having “the choice of being governed according to Shariah,” or Islamic law. Or the 60% of Muslim-Americans under 30 who told Pew Research they’re more loyal to Islam than America.

Maybe they’re all heretics, so let’s see what the enlightened Muslims think.

If Tapper did a little independent research he’d quickly find that America’s most respected Islamic leaders and scholars also want theocracy, not democracy, and even advocate trading the Constitution for the Quran.

These aren’t fringe players. These are the top officials representing the Muslim establishment in America today.

Hopefully none of them ever runs for president, because here’s what he’d have to say about the U.S. system of government:

• Muzammil Siddiqi, chairman of both the Fiqh Council of North America, which dispenses Islamic rulings, and the North American Islamic Trust, which owns most of the mosques in the U.S.: “As Muslims, we should participate in the system to safeguard our interests and try to bring gradual change, (but) we must not forget that Allah’s rules have to be established in all lands, and all our efforts should lead to that direction.”

• Omar Ahmad, co-founder of the Council on American-Islamic Relations, the top Muslim lobby group in Washington: “Islam isn’t in America to be equal to any other faith, but to become dominant. The Quran should be the highest authority in America, and Islam the only accepted religion on Earth.”

• CAIR spokesman Ibrahim Hooper: “I wouldn’t want to create the impression that I wouldn’t like the government of the United States to be Islamic sometime in the future.”

• Imam Siraj Wahhaj, director of the Muslim Alliance in North America: “In time, this so-called democracy will crumble, and there will be nothing. And the only thing that will remain will be Islam.”

• Imam Zaid Shakir, co-founder of Zaytuna College in Berkeley, Calif.: “If we put a nationwide infrastructure in place and marshaled our resources, we’d take over this country in a very short time. . . . What a great victory it will be for Islam to have this country in the fold and ranks of the Muslims.”