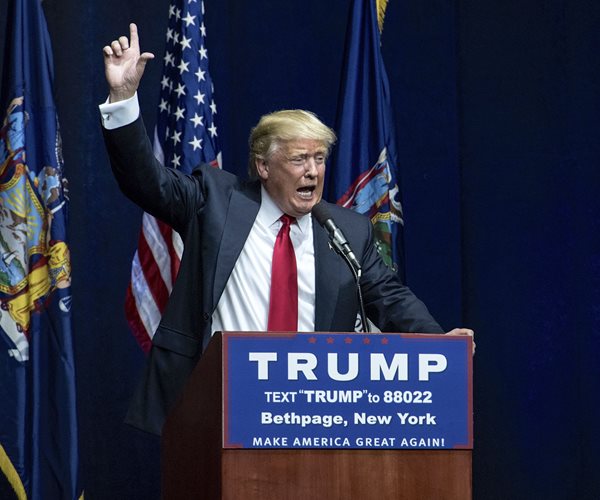 For Americans of nearly every race, gender, political persuasion and location, disdain for Donald Trump runs deep, saddling the Republican front-runner with unprecedented unpopularity as he tries to overcome recent campaign setbacks.

Seven in 10 people, including close to half of Republican voters, have an unfavorable view of Trump, according to a new Associated Press-GfK poll.

It’s an opinion shared by majorities of men and women; young and old; conservatives, moderates and liberals; and whites, Hispanics and blacks — a devastatingly broad indictment of the billionaire businessman.

Even in the South, a region where Trump has won GOP primaries decisively, close to 70 percent view him unfavorably. And among whites without a college education, one of Trump’s most loyal voting blocs, 55 percent have a negative opinion.

Trump still leads the Republican field in delegates and has built a loyal following with a steady share of the Republican primary electorate. But the breadth of his unpopularity raises significant questions about how he could stitch together enough support in the general election to win the White House.

It also underscores the trouble he may still face in the Republican race, which appears headed to a contested convention where party insiders would have their say about who will represent the GOP in the fall campaign.

“He’s at risk of having the nomination denied to him because grass-roots party activists fear he’s so widely disliked that he can’t possible win,” said Ari Fleischer, a former adviser to President George W. Bush.

Beyond their generally negative perception of Trump, large majorities also said they would not describe him as civil, compassionate or likable. On nearly all of these measures, Trump fared worse than his remaining Democratic or Republican rivals.

Not that voters have all that much love for those rivals. But their negative perceptions don’t match the depth of the distaste for Trump. Texas Sen. Ted Cruz, who is seeking to catch Trump in the Republican delegate count, is viewed unfavorably by 59 percent, while 55 percent have negative views of Democratic front-runner Hillary Clinton.

Another problem for Trump is that his public perception seems to be getting worse. The number of Americans who view him unfavorably has risen more than 10 percentage points since mid-February, a two-month stretch that has included some of his biggest primary victories but also an array of stumbles that suggested difficulties with his campaign organization and a lack of policy depth.

A survey conducted by Gallup in January found Trump’s unfavorable rating, then at 60 percent in the their polling, was already at a record high level for any major party nominee in their organization’s polling since the 1990’s.

Candi Edie, a registered Republican from Arroyo Grande, California, is among those whose views on Trump have grown more negative.

“At first, I thought he was great. He was bringing out a lot of issues that weren’t ever said, they were taboo,” Edie said. Now the 64-year-old feels Trump’s early comments masked the fact that he’s “such a bigot.”

“I don’t know if he’s lost it or what,” she said. “He’s not acting presidential.”Trump’s unpopularity could provide an opening for Cruz, though he is loathed by many of his Senate colleagues and other party leaders. After a big win Tuesday in Wisconsin, Cruz is angling to overtake Trump at the July GOP convention.

Clinton’s campaign believes Trump’s sky-high unfavorable ratings could offset some questions voters have about her own character, and perhaps even give her a chance to peel off some Republicans who can’t stomach a vote for the real estate mogul.

Andrew Glaves, a “hard core” Republican from Bothell, Washington, said he might have to side with Clinton if Trump becomes the nominee, even though she’s out of step with his views on gun rights, his top election issue.

“I’d be willing to take that as opposed to doing so much harm to the country’s reputation,” said Glaves, 29.

More than 60 percent of all registered voters and 31 percent of Republicans said they definitely would not vote for Trump in the general election.

One group that is still with him includes those who describe themselves as both Republicans and supporters of the tea party movement. Sixty-eight percent of them have a favorable view.

Pennsylvania Republican Robert Paradis plans to vote for Trump in his state’s primary this month. The 76-year-old said that while Trump’s uneven temperament makes him cringe “all the time,” he’s hopeful the front-runner’s bluntness can shake up Washington.

“He’s not a politician; he says it the way he feels it,” Paradis said.

The AP-GfK Poll of 1,076 adults was conducted online March 31-April 4, using a sample drawn from GfK’s probability-based KnowledgePanel, which is designed to be representative of the U.S. population. The margin of sampling error for all respondents is plus or minus 3.3 percentage points.

Respondents were first selected randomly using telephone or mail survey methods and later interviewed online. People selected for KnowledgePanel who didn’t otherwise have access to the Internet were provided access at no cost to them.