70-year-old Jewish farmer beaten to death by Arab Muslims – ‘Why Do the Police Lie About Our Father’s Murder?’ 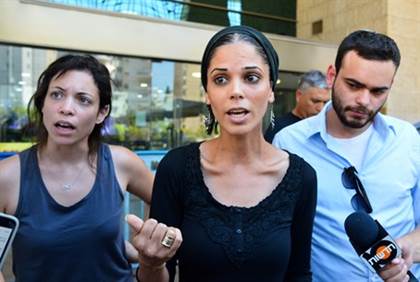 The children of David Bar Kapara, the 70-year-old Israeli farmer beaten to death by Arab terrorists last month, held a press conference on Thursday in which they denounced the police’s claim that the murder was criminal, rather than terrorist, in nature.

Arutz Sheva was on the scene for the press conference held outside the Rishon Letzion Magistrate’s Court, which came shortly after the Israel Security Agency (ISA) revealed the two Arab murderers from the village of Kfar Lakia in Samaria had previous records of terrorism. Despite the revelation, ISA claimed the two conducted a botched robbery instead of a terrorist murder.

Bar Kapara’s daughter took issue with the police claims, saying, “we see the murder of our father as nationalistically-motivated for all intents and purposes. I can say with certainly that they didn’t steal a thing from my father. He had the car next to him, he had the car keys, he had a lot of money in his pocket, and despite that they did not steal.”

Describing the horrific murder, she noted that her father was brutally assaulted all over his body until he died, “and therefore we do not accept the claim that we are talking about a criminally-motivated murder.”

The ISA said that in investigation the two murderers – Mujahid Ali Mahmoud Dar Assi and Alla’a Harbi Abed Al-Fatah Assi, both 21 years old – said the initially intended to steal from Bar Kapara but beat him to death when he resisted.

But Bar Kapara’s son noted that “the entire investigation is based essentially on the claim of the suspects, that it was a robbery that went wrong. This claim does not stand…in the face of the evidence from the scene.”

The body was found in an agricultural field between Pedaya and Carmei Yosef in central Israel, whereas the two murderers “came from a long distance, from Beit Likia – that’s a very long distance, next to Ramallah – they came to the vineyard in order to steal maybe 1,000 shekels – which they didn’t even steal?”

“All the evidence proves contrary to the claims of the police,” charged the bereaved son.

The accusations against the police charging them of playing down the terrorist murder of a Jew echoes numerous similar cases in which the police were accused of covering up the murder of Jews.

Those cases include the 2011 murder of Rabbi Moshe Talbi, only recognized as a terror victim three-and-a-half years after he was shot to death in a framed suicide; Asher Palmer and Yonatan, his less-than-a-year-old infant son, who were murdered in a rock attack on their car in 2011 and declared victims of terror a full week later; and Shelly Dadon, brutally stabbed to death by an Arab taxi driver in May 2014 and recognized as a terror victim over two-and-a-half months later.

Similarly police were condemned for claiming for two weeks that an accident was at fault, after construction worker Netanel Arami was murdered by Arab co-workers last September in a terrorist attack in which his rappelling ropes were cut; much later he was declared a terror victim, although the murderers have yet to be arrested.