The sign is 100% right! But the political correctness police claim it’s “racist” and “hate”. So much for free speech. 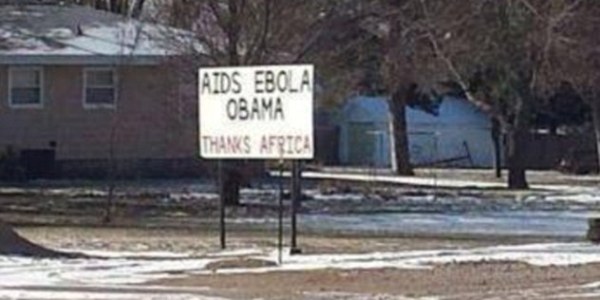 The sign was only up a short while, but its message caused a stir that has stretched from small-town Nebraska to Europe and beyond.

An unnamed resident of Minden, Nebraska, population 2,923, erected a sign on his property just off Highway 10 on the north side of town. The sign read: “AIDS, Ebola, Obama – Thanks Africa.”

The sign references two fatal diseases – AIDS and Ebola – thought to have originated on the African continent, and President Obama’s roots, as his father was a native Kenyan.

Though the sign was only up for a few hours on Monday, a photo of it spread via social media and eventually caught the attention of international newspapers.

London’s Daily Mail called it “hateful,” and claimed it “sparked outrage” in the small Nebraska town.

KSNB-TV of Hastings, Nebraska, reported the town’s mayor elect, Ted Griess, tracked down the sign’s owner and convinced him to take it down within just a few hours. Griess would not reveal the owner’s name.

“I got an email to the effect that it was creating quite a stir in the community,” Griess told the station. “It was so large, and it was coming into the community alongside the highway and, as the mayor-to-be, I didn’t want that type of image to be portrayed in Minden.”

The town’s current mayor, Roger Jones, said he thought the sign was “stupid,” but at the same time said it was “no big deal.”

“I’m stunned that America has come to this place where the hatred and the vitriol is so wide open now,” said Minden resident Bruce Lindstrom.

However, Minden resident Dwayne Wilson said, “I believe everybody has the right to their own opinion, and if they would like to state it, there should be nothing wrong with that.”

Greiss told the station only a few years ago, before the advent of social media, one little sign wouldn’t have garnered so much attention.

“It was being transferred all the way across this nation from one Facebook account to the next,” said Griess.