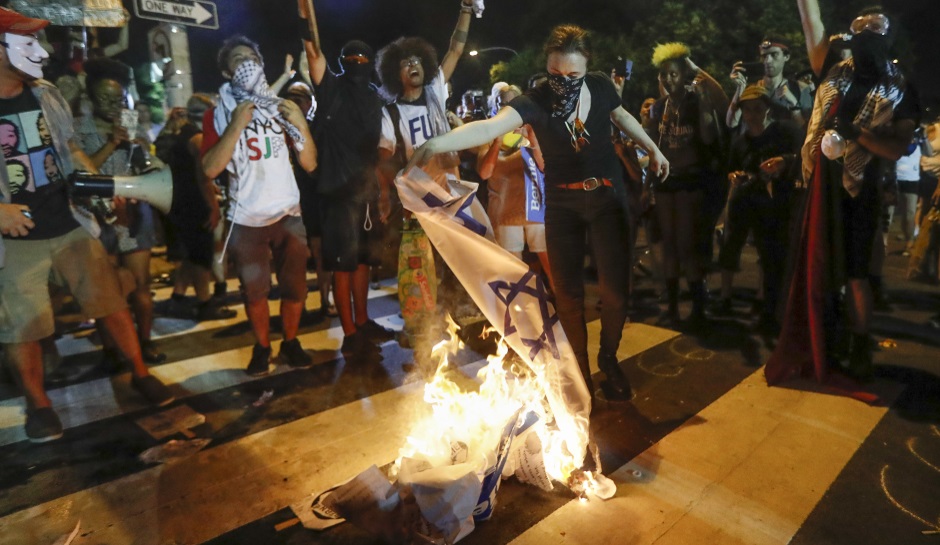 According to these reports, documented on cell-phone cameras and uploaded to Facebook and Twitter, pro-Bernie Sanders demonstrators, unhappy with Clinton’s nomination as Democratic presidential candidate, also waved placards reading: “From the river to the sea, Palestine must be free,” a slogan employed to call for the elimination of the state of Israel [and the Jews that live there].

Meanwhile, as The Algemeiner reported, inside the Wells Fargo Center in Philadelphia, where the DNC is being held, Palestinian flags were prominently displayed. Activists at the venue were seen holding up signs reading, “I support Palestinian human rights.” [Arab Muslims have been murdering and stabbing innocent Jews in Israel.]

In addition, as Conservative bloggers pointed out, DNC organizers capitulated to protesters demanding the removal of the Mississippi state flag, which depicts the Confederate standard.

Cooperation between the Black Lives Matter movement and anti-Israel groups — like Students for Justice in Palestine – which support Boycott, Divestment and Sanctions efforts has been widely touted and documented.

Among those tweeting about the flag-burning outside the DNC was Wall Street Journal reporter Byron Tau, who also wrote, “Most pro-Bernie protesters are just holding candles and singing. Only a tiny few interested in burning things.”

The DNC began on Monday and continues until Thursday.