AP: Sorry Lefties, Our Reporting on the Iran Agreement’s Secret Side Deals is Accurate 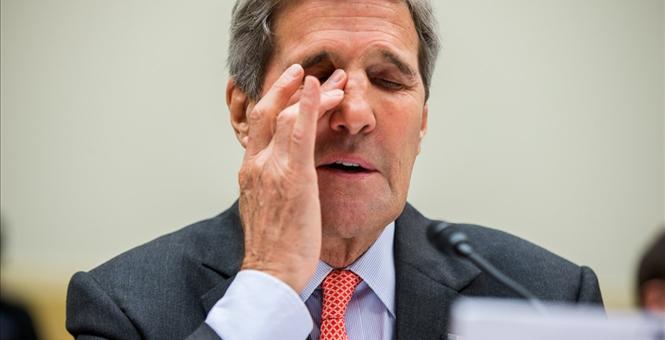 In the wake of a major Associated Press-reported revelation published earlier in the week, Obama administration defenders undertook a furious campaign to discredit the core of the AP’s story.  They lobbed accusations at the news organization, which pointedly declined to cower or backtrack — publishing the full text of the secret side deal at the heart of their bombshell scoop.  Its reporters openly defied critics to deny or refute the evidence.  To put an even finer point on it, AP reporter George Jahn published a devastating news analysis piece spelling out the implications of Iran’s private agreement with the IAEA, to which the US and other Western negotiating nations were not party:

An AP report has revealed that the U.N. International Atomic Energy Agency has agreed with Iran that Iranian experts and equipment will be used to inspect Iran’s Parchin military site, located not far from Tehran, where Iran is suspected of conducting covert nuclear weapons activity more than a decade ago…Any IAEA inspection of a country suspected of nuclear irregularities is usually carried out by agency experts. They may take swipes of residue on equipment, sample the air or take soil samples in attempts to look for signs of clandestine work on atomic arms or other potentially dangerous unreported activity. The document on Parchin, however, will let the Iranians themselves look for signs of the very activity they deny — past work on nuclear weapons. It says “Iran will provide” the agency with environmental samples. It restricts the number of samples at the suspect site to seven and to an unspecified number “outside of the Parchin complex” at a site that still needs to be decided. The U.N. agency will take possession of the samples for testing, as usual. Iran will also provide photos and video of locations to be inspected. But the document suggests that areas of sensitive military activity remain out of bounds. The draft says the IAEA will “ensure the technical authenticity of the activities” carried out by the Iranians — but it does not say how…Any indication that the IAEA is diverging from established inspection rules could weaken the agency, the world’s nuclear watchdog with 164 members, and feed suspicions that it is ready to overly compromise in hopes of winding up a probe that has essentially been stalemated for more than a decade.

The Associated Press got the story right.  When pressed, the State Department refused to contest its details, punting repeatedly on the question.  Iranian self-inspection at Parchin is yet another extraordinary concession within a broader deal that heavily favors the regime.  Iran is permitted to keep its vast nuclear infrastructure intact, Western restrictions begin to automatically phase out after ten years, the inspections regime is weak, and other rogue Iranian programs are validated and permitted to flourish.  Iran is effectively asked to pause its nuclear program for a decade or so, after which it would emerge as an internationally-blessed threshold nuclearized state.  During its recent nuclear “pause” during negotiations, Tehran’s stockpile increased substantially, and the regime was repeatedly flagged for cheating.  As Dan noted earlier, a new CNN poll is the latest in a string of public opinion surveys showing majority opposition to the deal, with six-in-ten Americans disapproving of President Obama’s handling of US policy vis-a-vis Iran’s anti-American, terrorist regime.  I’ll leave you with former Virginia Senator and Democratic presidential candidate Jim Webb coming out against the accord, arguing that it shifts the balance of power in Iran’s favor: