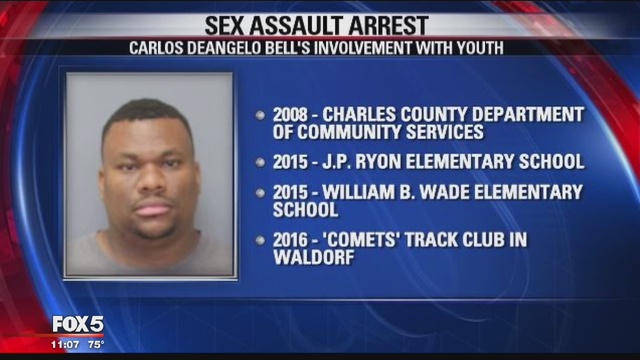 Only an evil person would sexually assault children, but then you add to that the fact that this homosexual wanted to intentionally infect kids with HIV, and you have a level of evil that’s unfathomable for most people.

Police launched an investigation in December after a parent complained about inappropriate texted between Bell and their child. Investigators with the Charles County Sheriff’s Office initially believed Bell victimized about 10 children, but that figure more than doubled when the Charles County State Attorney’s Office announced the charges against him Monday, according to NBC Washington.

Bell, who was put on administrative leave in December, allegedly continued to sexually assault students during the investigation.

Authorities now believe there were at least 24 victims, 11 of whom have not yet been identified, prosecutor Tony Covington told the news site.

Sheriff Troy Berry said the victims were all boys and “mostly middle schoolers and pre-adolescent students” and alleged Bell recorded videos of his assaults, including sex in a classroom at Benjamin Stoddert Middle School in Waldorf.

“Some of the crimes appear to have been committed on school property and others at his home in Waldorf,” Berry told NBC Washington.

“In an organization that is all about children, these allegations are horrifying,” Charles County superintendent Kimberly Hill said. “To our parents and our community, who put their faith and trust in us to safeguard their children, I apologize on behalf of Charles County Public Schools. Student safety is job one, and clearly we have work to do to make sure this will never happen again.”

Hill vowed to launch a “comprehensive and transparent” examination of the district’s safety protocols and sexual harassment lessons.

Authorities believe there may still be more victims, and Covington is appealing to the public to build the case against Bell.

“We still need help from the public,” he said. “We still need people who know something about this case to contact the sheriff’s office.”

In total, Bell currently faces 119 charges and a potential prison sentence of 1,500 years, if convicted.

At least two of Bell’s alleged victims have tested negative for HIV, according to the news site.

According to NBC Washington:

Bell was an aspiring fashion stylist who appeared on a reality TV show, a college classmate and six other people who knew him told News4. He was a contestant on the short-lived CBS show “The Job.” He competed, unsuccessfully, in an episode that aired in 2013 for an editorial assistant position at Cosmopolitan magazine.

“Cosmo could definitely change my life,” Bell said in a promotional video for the show, wearing a pair of handcuffs dangling on a necklace.