Congratulations, Taxpayers, You Get To Pay For Chelsea Manning’s Transgender Hormone Therapy 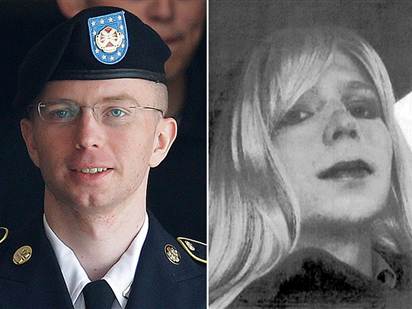 Every now and then, a story comes along that captures everything wrong with modern America.  The Army’s decision to pay for hormone treatments so that convicted national-security leaker Bradley Manning can transform into Chelsea Manning while doing time in Leavenworth is such a story.

“After carefully considering the recommendation that (hormone treatment) is medically appropriate and necessary, and weighing all associated safety and security risks presented, I approve adding (hormone treatment) to Inmate Manning’s treatment plan,” Col. Erica Nelson, the commandant of the Fort Leavenworth Disciplinary Barracks in Kansas, wrote in a Feb. 5 memo.

Formerly named Bradley Manning, the soldier was convicted of sending classified documents to anti-secrecy website WikiLeaks. Manning is serving a 35-year prison sentence and is eligible for parole in about seven years.

At Manning’s trial, her attorneys argued she had been disillusioned by the wars in Iraq and Afghanistan and believed the release of the documents, including diplomatic cables and military reports, should be seen by the public.

Manning sued the federal government for access to the treatment. The Army referred questions about Manning to the Department of Justice, which has been handling the case. Nicole Navas, a Justice Department spokeswoman, declined to comment, saying the government’s position is detailed in court filings.

The American Civil Liberties Union, which represents Manning in the case, did not have an immediate comment on the Army’s memo.

Manning had asked for hormone therapy and to be able to live as a woman. Transgender individuals are not allowed to serve in the U.S. military and the Defense Department does not provide such treatment. The Department of Veterans Affairs, however, does provide the treatment for veterans.

If you are a veteran who served your country honorably, and you have a serious medical issue, you could end up on a secret death list stashed in some bureaucrat’s drawer so the VA bureaucracy can cook its books and score some sweet “performance bonuses” for the top brass.  When this was eventually exposed – not by the titanic mega-government that thinks $3 trillion in spending would qualify as “austerity,” but by media investigators – President Obama acted deeply annoyed, spent a couple of weeks trying very hard not to do anything about it, and was eventually browbeaten into asking for the resignation of VA Secretary Eric Shinseki. There are still big problems at the VA, but the President’s final comment on how little he cares about the situation was ordering his limousine to roar past ground zero of the scandal, the Phoenix VA hospital, without stopping so he could attend a fundraiser.

But gender-reassignment treatments for someone who is going to spend most of the rest of his/her life in prison for exposing national security secrets?  Sure, we will get right on that, just as soon as the military brass offloads responsibility for making the decision to Obama’s politicized Justice Department.  If the goal of this exercise is to prove that under the Democrat theory of government, nothing is so wacky that the American taxpayer shouldn’t be forced to cover it, then Mission Accomplished.

The realm of absurdities that our hyper-legalized mousetrap bureaucratic and legal systems somehow force to happen automatically – while the sane, normal, honorable, and productive are taxed and regulated into the dirt – grows larger.  We can only wonder what remarkable precedents the Manning decision will set, and how much they’ll cost us.