Donald Trump has now made clear that the thrust of his campaign will not be conservatism. It will instead be populism and nationalism. 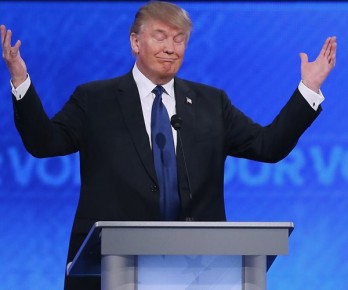 For those looking for a governing philosophy of The Donald, his checkered political history has provided little guidance. He’s seemingly endorsed single-payer healthcare; he’s said he rejects Obamacare. He’s blasted money in politics; he’s talked about the necessity for government use of eminent domain to help private parties. He’s ripped overregulation of capitalistic enterprises; he’s talked about tariffs on foreign goods. Trump isn’t conservative, and he never was.

Senator Ted Cruz, Trump’s chief challenger in the next primary state of South Carolina, is utilizing that lack of coherent conservatism as a club against Trump. His latest ad blitz features a small boy holding a Trump action figure, shouting, “Look, I got the Trump action figure! He pretends to be a Republican!” He then uses the action figure to brag about giving money to Democrats and engaging in eminent domain.

Trump won’t be able to trump Cruz on conservatism. So now he’s making clear that he isn’t running a conservative campaign – he’s running a nationalist and populist campaign. His enemies include both Republicans and conservatives:

Remember, it was the Republican Party, with the help of Conservatives, that made so many promises to their base, BUT DIDN’T KEEP THEM! Hi DT

Trump’s move here is calculated. He’s going to campaign as a post-ideological candidate. All he wants, as he said in his next tweet, is to “MAKE AMERICA GREAT AGAIN.” If that means bigger government, that means bigger government. If that means more interventionism in the economy, that means more interventionism in the economy. Trump believes he can restore American greatness in his personage – he can make terrific deals, he can “win” on behalf of America.

Many of his followers believe that, too.

@benshapiro @KenYounos You care more about a failed ideology than saving the country. Oh well – too bad. “Conservatism” failed for decades.

@benshapiro concept eludes you doesn’t it?!?!?! has NOTHING TO DO with ideology but never mind what’s the use you’ll never comprehend

@benshapiro Yes, Trump’s a nationalist who transcends left and right, and that’s why America needs him. Fuck conservatism.

Trump stands up for America; Trump Hulk Smashes for you. He cares about America, and that’s enough – he wants to restore American greatness, and that’s enough. How will he do it? He just will. And he won’t be held back by any conservative vision of a small government nation founded on individual liberty. Sometimes he’ll do conservative things. Sometimes he won’t. But he’ll act with “common sense” and “do what needs to be done.”

None of this should be comforting for conservatives, but Trump doesn’t mean for it to be. He’s hoping that there are enough aphilosophic Americans to push him forward to victory.

He may be right.

Even if he is, that’s no victory for conservative principles. As Trump says, that’s not a priority.