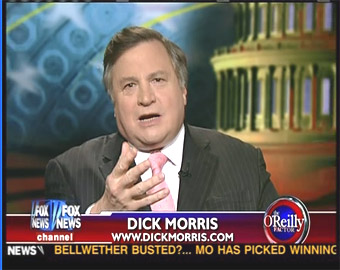 “It’s unlikely that that will be confined to Wisconsin,” Morris told host Dennis Michael Lynch on “America Votes: 2016″ in an interview.” He can’t handle the pressure.”

He said that the spatting between the two rivals during the Wisconsin campaign “is helping Cruz decisively, which is why Cruz has let it continue.

“In fact, I would argue that Cruz really baited Trump into this — because it’s showing the real Donald, and it’s showing him in a way that women are revolted by.”

“Perot fell apart when the pressure got intense after he took first place in June of 1992. He had to pull out of the race — and he came back in September, won 19 percent.

“Trump is showing real evidence of coming apart, when he says NATO’s obsolete and Japan and Korea should get the bomb and the Geneva Convention should be repealed. Totally flaky stuff.

“This is a bullfight — and the picadors have gotten the bull really mad, and it won’t be hard to kill him now.”