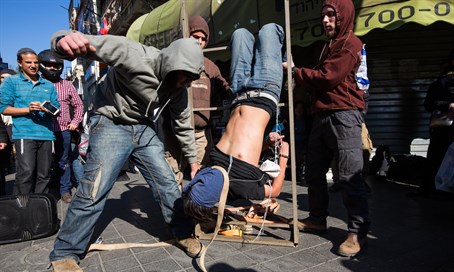 Documents were revealed for the first time on Thursday from the investigation into the lethal arson at Duma last July, and they fall in sharp contrast to the denials of torture against the Jewish suspects made by officials and numerous politicians.

The torture claims made by the suspects were given a level of confirmation in late December, when sources close to the investigation revealed to Haaretz that Attorney General Yehuda Weinstein had given permission to torture the suspects three weeks prior.

The newly revealed materials were from the reports of attorney Liana Magad of the central region district attorney’s office, who accompanied Deputy Attorney General Raz Nizri’s visit last December to the Israeli Security Agency (ISA or Shabak) compounds where the suspects were interrogated.

The two met with the suspects while in the presence of ISA members, and were given shocking details about the nature of the interrogation, which even led one minor suspect to reportedly try to commit suicide. The suspect later showed scars from the attempt.

In an example of the testimony from the report, one of the minor’s told Nizri before the ISA members that he was tortured and felt intense pains. In Magad’s records she wrote that he testified that “they kicked him during the interrogations, they pulled his head back and only after he complained to the judge did it stop.”

The minor told Magad that the interrogators also abused him by “lifting his hands backwards to 90 degrees, he felt a burning and fell to the floor,” and only then did the interrogators release his hands from the handcuffs that were holding him in the torture position.

He added that he was slapped while his eyes were covered, which caused him to temporarily lose his hearing in one ear, and that the ISA agents pressed his ribs causing him intense pain.

Another young suspect described how he “was shaken during the interrogations, they lifted him by his shirt, with his head back and shook him.” He related being handcuffed for many days, and having intense pain inflicted on him.

Amiram Ben Uliel, the only suspect to have an indictment filed against him after he made a confession following intense torture, said that before his confession he was forced to lie backwards in a painful bridge position for many long minutes.

Ben Uliel emphasized that he only made the confession so that they would stop torturing him.

Many have noted issues with the indictment charging that Ben Uliel committed the arson alone, given that the handwriting of the graffiti at the arson site appears to have been written by two different people, and witnesses testified to seeing more than one assailant.

Attorney Itamar Ben-Gvir who represents two of the suspects noted how Nizri completely hid the testimony of torture after his visit, when he claimed the suspects were in “good condition.”

“Members of the attorney’s office were not honest when they hid from the politicians and from the court the serious claims they heard in real time, and making their actions worse when they didn’t stop the interrogations even after it was revealed to them that the ISA interrogators acted as if they were in Argentina.”

“A senior official like Raz Nizri is expected to act against the injustices he was exposed to, but unfortunately he decided to be silent, and harmed not only the youths but also the wider mandate given to him as Deputy Attorney General assigned to the rights of the citizen.”

The lawyer noted that “if even someone like Nizri was silent, what can we expect from the ISA interrogators who beat up our clients.”

Also responding to the revelation was attorney David Halevi, who represents other suspects in the case for the Honenu legal aid organization.

“During all the interrogations that took place in this case we repeatedly argued time and again that our clients were tortured during their interrogations by ISA interrogators,” said Halevi.

“This torture included sleep deprivation, food deprivation, serious psychological pressure including heavy physical violence on our clients, with the only end to these acts (of torture) being to produce confessions, and in effect what was presented were false confessions.”

Emphasizing the seriousness of the case, the attorney said, “these claims are not mentioned in the investigation materials passed to us, and apparently they were ‘whitewashed’ or given a strict filtering by ISA sources.”

“Precisely these records compiled by sources who tried to reduce the severity of these serious acts and give them legal approval point out that these are true claims that were made immediately at the stage of investigation, and right after the torture was committed, both at court and before these sources (i.e. Nizri and Magad).”

Halevi added that “these records are only the tip of the iceberg, as they were compiled by sources with an interest and desire to silence the claims.”