An Israeli driver and his 11 year old daughter were attacked by Arab terrorists who threw a firebomb at his vehicle Thursday night. 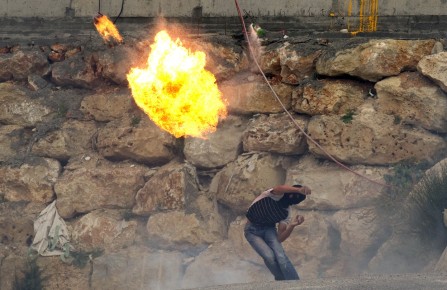 An Israeli driver and his 11 year old daughter were attacked by Arab terrorists who threw a firebomb at his vehicle Thursday night. The two suffered burns, but managed to escape from their burning vehicle. They were treated on the scene by Magen David Adom rescue workers and taken to the burn center at Tel Hashomer Hospital. The girl is on a respirator and said to be in serious condition by doctors.

The incident occurred on a service road between Maale Shomron and the new community of El-Matan. Ma’ale Shomron is located off Road 55, which stretches between Kfar Sava and Shechem. IDF troops were in pursuit of the terrorists.

Avi Na’im, chairman of the security council in the Local Authority and head of the Beit Aryeh local council, said that “the response to the throwing of a firebomb must be shooting the terrorists with intent to kill. An 11 year old girl on her way home with her father should not be a target.”

In recent months, there have been several rock and firebomb throwing incidents in the area of Road 55, which had been considered quiescent until recently. Several weeks ago, large numbers of IDF troops massed to successfully hold back a mob of Arabs from the neighboring village of Azzun who had attempted to march on Ma’ale Shomron.