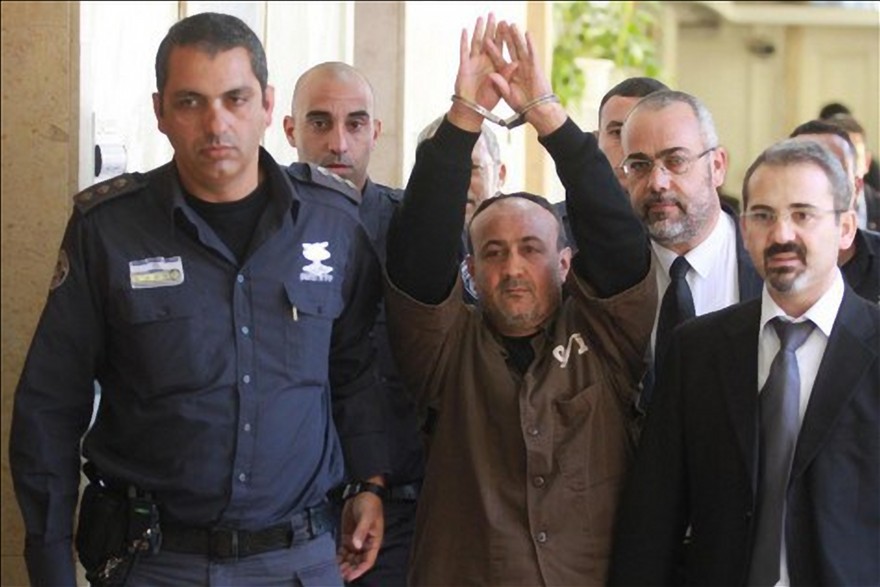 And only 48 hours after a priest was brutally ‘sacrificed’ by Islamic State. I guess the mass murders didn’t count since the victims were only Jews.

Just two days after two Da’esh (ISIS) terrorists ritually sacrificed an elderly Catholic priest by slitting his throat on the altar of his own church as he was serving Mass, France has again bestowed the title of “Honorary Citizen” upon another cold-blooded terrorist killer.

PLO terrorist Marwan Barghouti is the darling of the movement to create a new Arab state [that would replace the tiny] State of Israel. He is also popular on the PLO street, where citizens still vote for him during elections though he is sitting in a jail cell. Hamas has attempted during every parlay with Israel to free him; but he is one of the terrorist prisoners least likely to ever be released.

The leader of the Tanzim paramilitary terrorist organization, Marwan Barghouti is serving five consecutive life sentences plus 40 years for the particularly brutal murders of five Israelis. Among the dead was a 3-year-old girl.

That doesn’t include the deaths of the “hundreds of civilians, both Israelis and citizens of other states,” that he is also responsible for, said Israeli Ambassador to France Aliza Ben-Nun in an open letter published in France.

This is the eighth time since 2009 that Paris has bestowed the honor upon Barghouti. No fewer than 20 cities in France have honored the child-killer with the title of “honorary citizen,” according to the French L’Humanite newspaper.

None have invited him to come live within their municipal boundaries, however.

Ben-Nun expressed “deep shock and worry” in her letter, saying that French officials who pay tribute to Barghouti are “not only guilty of supporting terrorism but also have denied values that are cherished in both France and Israel.”

There have been repeated struggles between Israel and France over the latter’s attempts to portray Barghouti as a folk hero, including one attempt this past spring by Paris to present the killer to the world as some sort of “Nelson Mandela.”

In fact, a Paris auction house was ordered to remove a painting in which the chief of the Tanzim terrorist organization was actually presented as a PLO version of the South African president and leader. “Nelson Mandela was also called a terrorist in the 1950s,” wrote the artist in the inscription.

But the Paris government didn’t issue the order until the auction house received a letter from the Israeli embassy, expressing disapproval of the comparison made by the artist between Mandela and Barghouti. The letter pointed out that Mandela opposed violence; Barghouti, on the other hand, is a real terrorist and a convicted killer. He is serving five consecutive life sentences plus 40 years for the heinous murders he committed.

He’s the kind of terrorist who would fit right in with the bloodthirsty murderers who slaughtered the 84-year-old priest who was celebrating Mass at the altar of his church two days ago, and who forced his fellow priest to film the event as they did so.

Perhaps that’s why France again has awarded him the honor, so close to the barbaric murder of the gentle man of Allah in Normandy?

Equally strangely, both chambers of the Belgian Parliament voted in May 2016 to nominate Barghouti for the Nobel Peace Prize. A letter was sent to the Nobel Committee in which the killer was called a “peace activist and a key figure in Palestinian-Israeli settlement.”

In terrorist-besieged Belgium, this is akin to something like the Stockholm Syndrome.

One wonders whether any of the security officials in either of these countries have considered the message being sent to the world’s terrorist community — and it is a real community, make no mistake — and how that warm welcome gets played to the budding lone wolves being recruited online.

Could be the leadership may only be ‘talking the talk’ about declaring “war on terror” for the cameras.

If so, then it looks like Brexit came just in time.